Steakhouses are a great thing. If you live in London you are spoiled for choice with your Goodmans, Hawksmoors, Byrons etc. Steak specialists have started to spread to Essex such as Southend’s Bourgee. Now Chelmsford can claim it’s own prime steakhouse. Chop Bloc is a new opening that looks to recreate the best elements of steakhouses from London, America and Canada.

After spending years working in abbatoirs and meat distribution supplying the big high street chains, the two founding brothers wanted to make their mark with a quality steakhouse. 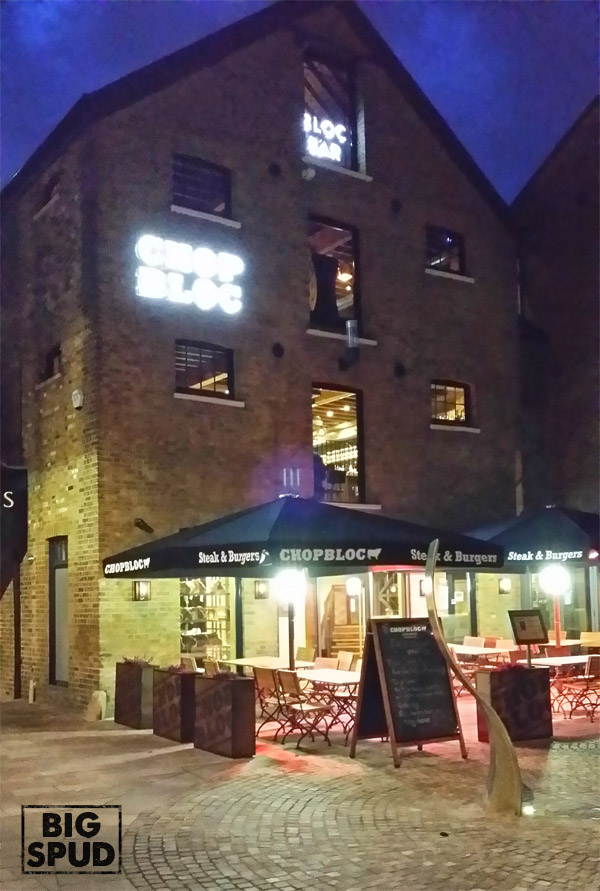 Four years from conception, the building is impressive from outside to in. Built into an 18th century grain house and brewer’s, there is a happy marriage of original features, nods to the past and modern flourishes. There’s exposed brickwork, thick mahogany, vaulted beams and leather banquettes. I was reminded of Gallagher’s, my favourite Manhattan steakhouse. 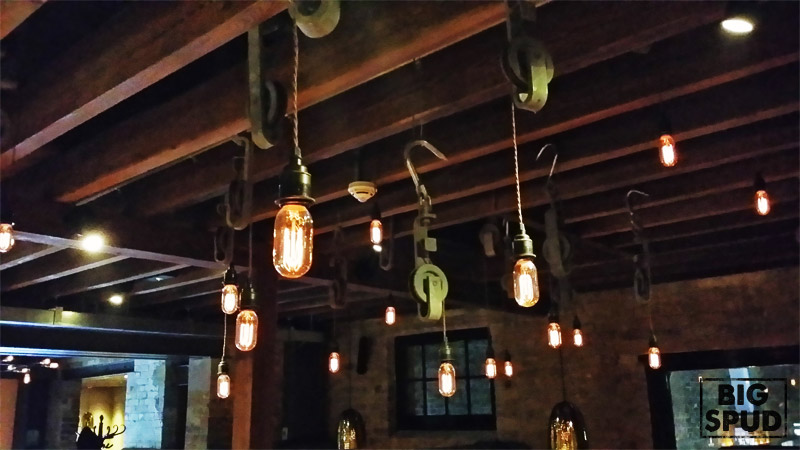 The rustic lighting hangers are actually abbatoir meathooks, a callback to the founders’ background.

But, on to the beef. Sourced from an supplier of Hereford cattle, they take the unusual (for the UK) move of dry aging the meat onsite. There’s storage for over three tons of beef in the building, which gives the chef great flexibility to portion the meat when it’s at it’s finest. 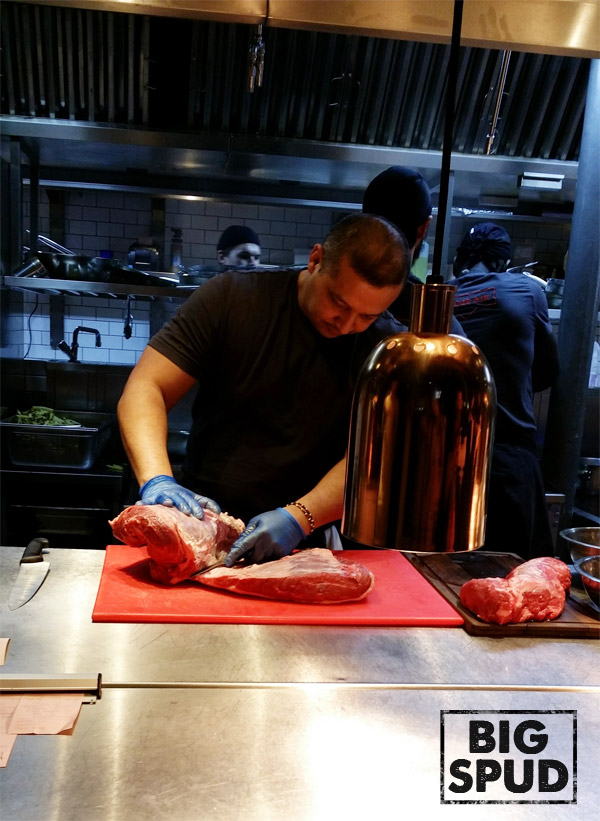 But before we could try this meat, some starters. There were plenty of chicken wings of different flavours, as good as they should be, but I had a real gem in panko-crusted pork belly with a kecap manis dip. Perfectly crisp but melting inside, this is one I’m going to be recreating at home. 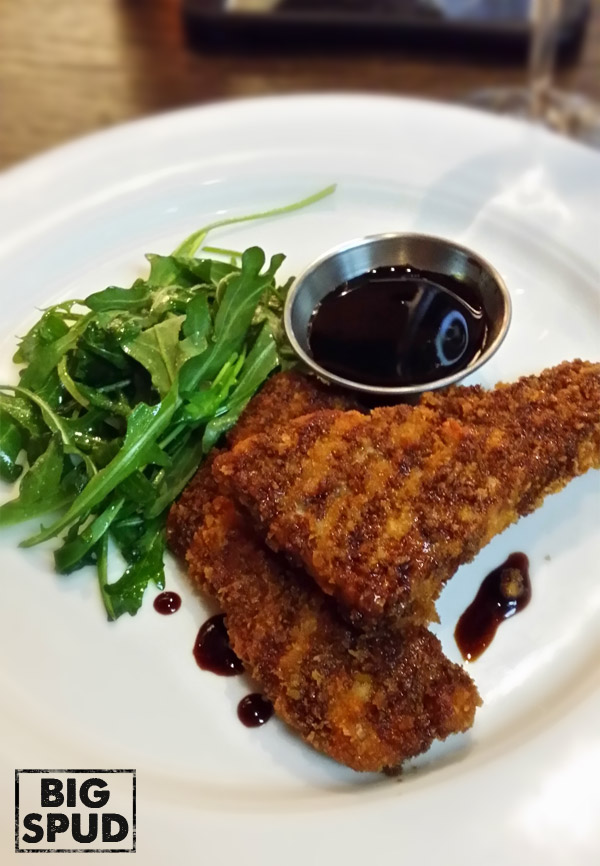 But enough of this, where’s the beef? Well, you can order pretty much any well-known cut and with a little prior notice a less well-known one too. We tried rump, fillet and picanha. 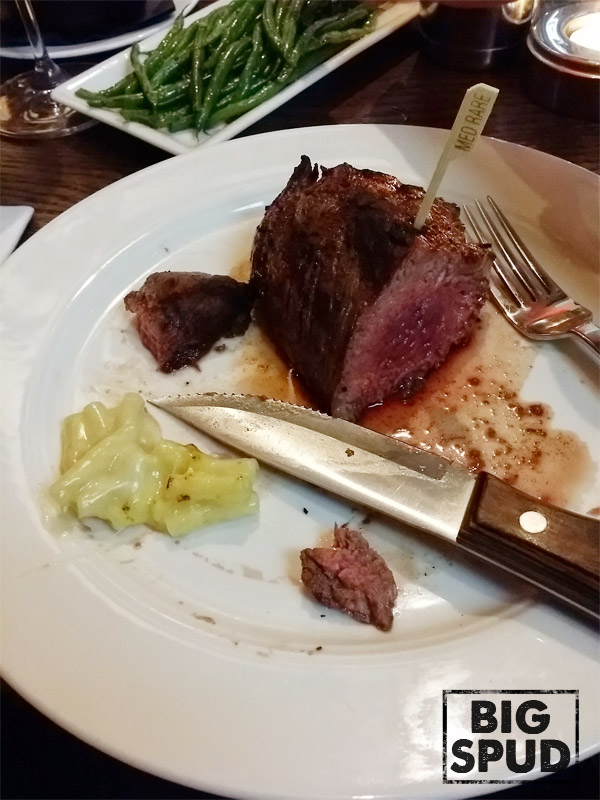 If you look at the picture above, you can probably see how good it is. Cooked in a Josper charcoal oven, the outside has a smoky bark-like char, while the middle gives way, perfectly tender. And it’s this gradation that co-founder Steve was keen to attain. Rather than a uniform sous-vide steak (not that I have a problem with that) your meat has different layers of texture and taste.

Treated with care, steak is a thing of real beauty. It’s one of those things most people can cook, but there’s a heap of work, experience and effort that goes into making it a fantastic dinner. This was everything a great steak should be. Packed with flavour, moist and tender yet still something to get your teeth round. Trust me: it’s great. 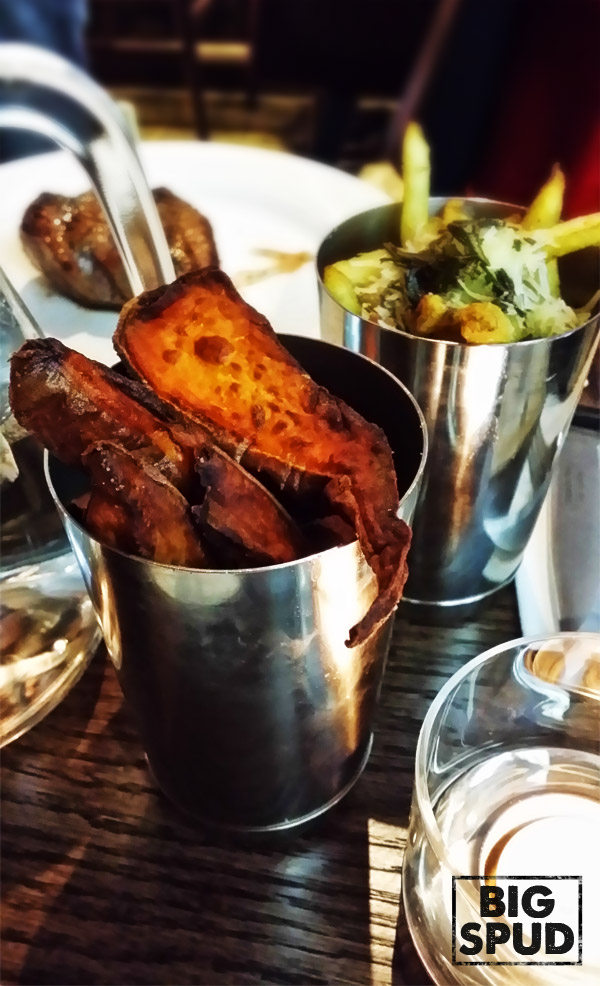 Good meat does not come cheap, and here it emulates the US model which can feel unusual in this country. You buy your steak solus, then surround it with sides from the menu. A rib-eye starts at £21, rump £15. In my mind decent steak – decent food full stop – should be paid for properly. Cheap food has a price somewhere down the line. But for spoiling someone, or spoiling yourself, I can think of few better things to do than scoff down an exceptional steak. And Chop Bloc is where I’d like to go to do it. There’s passion in every element of the restaurant, from the chairs to front of house to the beer choices and everything in between, and it shows in the final product. I wish the brothers every success.

Seated opposite the kitchen, I did see fish and poussin alternatives, as well as a wide range of burgers and vegetarian dishes, but let’s not kid ourselves. This place exists to satisfy steak lovers, and it goes further than that. It excites them.

Chop Bloc is open every day for lunch and dinner. You can find it at Grays Brewery Yard, Springfield Road, Chelmsford, CM2 6QR, or visit the website.

I was a guest of Chop Bloc and didn’t pay for dinner. If they’d have told me what to say however, I would’ve laughed all the way to McDonald’s.

Dhruv Mittal If We Were To Reopen The