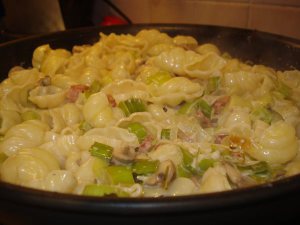 Crappy name, sorry about that. But we’ve never settled on a better name for this heavenly and wholesome dish, that not only celebrates the ingredients in it, but is an absolute triumph of speed and economy. I found it via Gordon Ramsay’s Fast Food: Recipes from The F Word 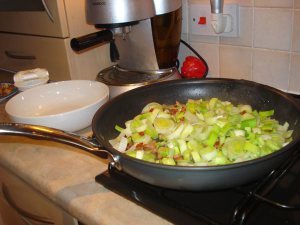 Get some pasta going in boiling water. Two tips here: make sure the water is at “the rolling boil” and going great guns. Secondly, always salt the water. How much? The best advice I heard was “twice as much as you think you need” which never fails me. The pancetta starts off in a medium-heat big saucepan, and once slightly crispy, leeks go in. When tender, mushrooms, then a couple of minutes later a small tub of creme fraiche is added while the heat goes down. Season up now and have a taste. As there’s not a lot of cooking going on it’s going to need good seasoning to bring the flavours out. By now the pasta should be done (al dente please) so drain that and add a splash of cooking water and the shells to the mix and toss together.

That’s it. Honestly. For perfection I add a dash of chopped parsley, but it’s such a celebration of each of its parts it’s really difficult to get wrong. Salty pancetta, tangy leeks, meaty mushrooms and a tart creamy finish, all cupped in a little pasta shell. Brilliant.