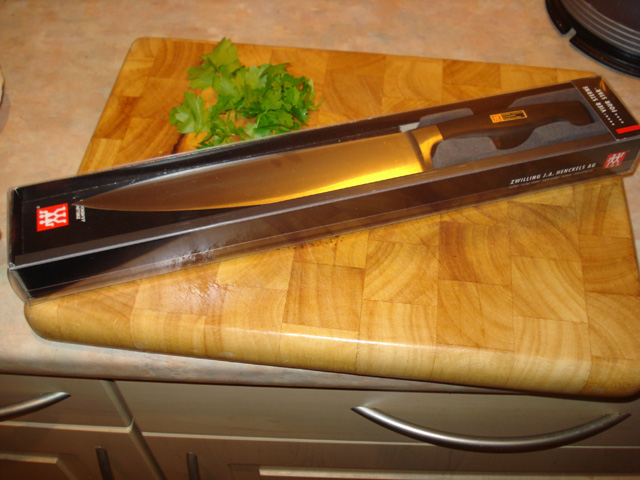 Alright, that might be exaggerating. But I’d heard professionals say for years that a super-duper knife is the best thing you can have in the kitchen and it makes perfect sense. It’s probably the thing you use most after all, I’d just never had the funds to back it up! Thanks to filling out some online surveys I finally had enough Amazon vouchers to purchase something of a decent provenance. After much (…much) deliberation, I decided to plump for something from the Henckels brand favoured by many chefs including Jamie Oliver. The Five Star range is a little out of my league so I came down to Four Star, and I like a multi-purpose knife so a Henckels Four Star Cooks Knife 23cm 31071231

seemed perfect. (A quick thanks to Culinaire / Kitchen Knives Direct for a great price and mega-fast dispatch!)

Straight out of the box the weight hit me. Quite weighty, with midpoint just past the hilt encouraging a downward stroke. For dinner that night I planned an omelette which didn’t require any chopping, so I introduced an onion into it regardless just so I could try the knife out. I went for the horizontal stroke, and it wanted to almost bite into the onion, without any pressure. It clung to it and then went straight through without a great deal of pressure. Coming into the vertical strokes, the precision and sharpness of the blade allowed them to be extremely close together. After finishing off the crossways motions I ended up with perhaps a 3mm dice. It was immensely satisfying, and I got a glimpse of another world of being able to get superb results every time.

I have a new best friend 🙂 Anybody else have pro knives they adore?

(Do you really want to know how I dice an onion? I’ll blog it if anyone’s faintly interested.)