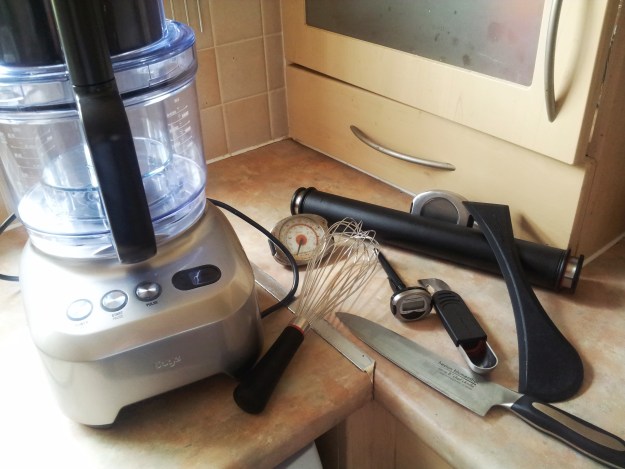 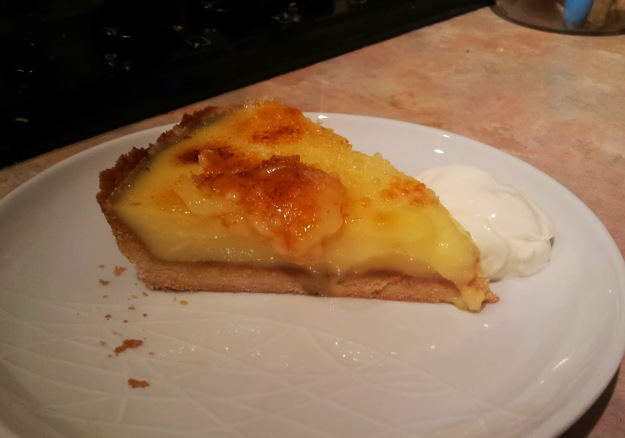 Hold on to your toques, this is a Blumenthal gadget-fest. Here’s a run-down of the Heston kitchen toys employed in this recipe:

That’s a hell of a list. The odd one out in this list is the Kitchen Wizz Pro, a beast of a food processor, but more on that in a future post. I’ve also used my trusty chef’s knife, easily the best knife I’ve ever used. Most of them are Salter’s / HoMedics to celebrate the launch of their new range of Heston gadgets. It’s fair to say they’re a mixed bag.

The initial range of Heston By Salter tools are all solid: the probe thermometer, kitchen timer, fridge thermometer, oven thermometer, measuring jug, scales; all good. Some of the newer items feel superfluous. First up the adjustable rolling pin. It comes with discs that adjust the height of the pin from the surface. Genius! I was looking forward to this. As someone who is mostly terrible at pastry the ability to roll out to a consistent thickness really appealed to me. Unfortunately the pastry stuck immediately to the pin and made a complete mess. After prodding it for a while I transferred it to the pastry dish for baking and rolled it up loosely around the pin. Again it all stuck to the pin and essentially turned my smooth-plasticine dough to a patchwork quilt. Just look at the pastry in the picture, that’s supposed to be 3mm but it’s more like a centimetre! Very disappointing.

The whisk is much better, being well-balanced, sturdy and comfortable to hold when whisking an egg custard over a bain marie. The measuring spoons are a cute gimmick, in that you slide the compartment to the right measurement (e.g. 1 teaspoon, ½ tablespoon) and then drag a little lid over the powder to level it off. But a couple of things bothered me: my fingers were a little greasy from handling butter and I just couldn’t work it without putting everything down, washing hands and re-measuring. And I can’t get past the price: £17.99 RRP for two spoons when the same thing is achieved with a £1 (or less) set of plastic measuring spoons available anywhere, with the help of any knife for levelling.

Rounding out the collection are the spatulas which are quickly becoming two of my favourite things in the kitchen: with one curved end for sculpting and smoothing, and a firmer end for flipping and scraping. I use a lot of non-stick bakeware, frying pans and saucepans so having something to poke at the edges of something to flip it over is really handy. Again though I have to wince at the price: £17.99 for two spatulas isn’t great value.

All the equipment in the range is well made and thoughtfully designed, but these items are just not as “must have” as the original kitchen gadgets. They’d make great gifts though.

I used all these tools and more in making Heston’s lemon tart. There’s an awful lot of Heston in this; he spent years at the Fat Duck perfecting the ‘wobble’ in his cakes. It comes down to temperature – a tart at 70°C is perfectly set. And of course, he’s right. It’s a brilliant dessert, and the probe thermometer is the most essential gadget of them all. Just one niggle: serving with creme fraiche is a complete waste of time. Totally gets lost against the lemon flavour – don’t bother.

Zest of ½ a lemon, grated

Who Is The Host Of 'Crazy Delicious' On Netflix? Everything To Know About Comedian Jayde Adams

But, yummy set aside, the host and the judges -- Carla Hall, Niklas Ekstedt, and Heston Blumenthal -- have become overnight sensations in America.