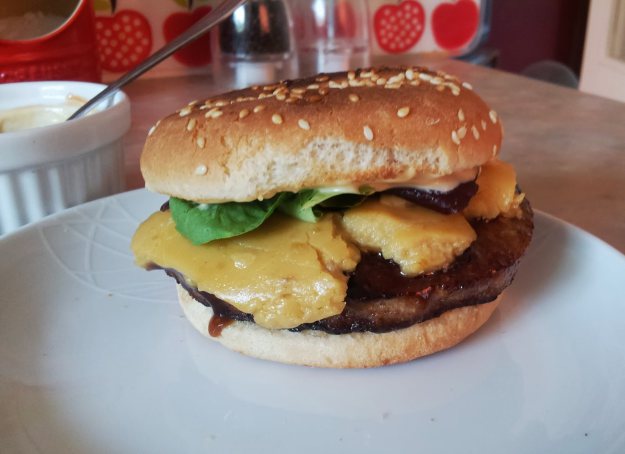 What is it with burgers? After spending the 2000s in the doldrums, they’re now elevated to greasy lunch treat du jour.

I was a little surprised to see this recipe from Heston pop up online; his In Search of Total Perfection

Burger involves grinding different meat cuts together, the most laborious method for making a bun you’ve ever seen, and a quite detailed method of making cheese slices involving sodium citrate and other odd things (a recipe that’s in marked contrast to my ingredient infographic!).

But this version appears to mostly be a shill for his Heston burgers, with a much simplified cheese slice recipe. So I gave it a go. And being the arrogant sod I am, endeavoured to improve it.

I used Comté cheese and cheddar for a more interesting blend, and whisked it with Chardonnay over ale as I don’t like the taste of beer. I included my own touch that I usually use of a drip of oyster sauce to act as a glaze. It provides a tantalising umami layer in your burger that you can’t quite place but makes it irresistible. The cheese slice was very tasty and really not a lot of work so well worth doing again. You could probably come up with a bunch of interesting ingredients to add into it too.

Looking for a tasty burger recipe this bank holiday weekend? You could do a lot worse than this recipe.

The original Heston recipe without me mucking about with it can be found here. And read In Search of Heston having a go too.

For the cheese slices:

For the burger sauce:

Handful of crisp lettuce leaves (I like lollo rosso)