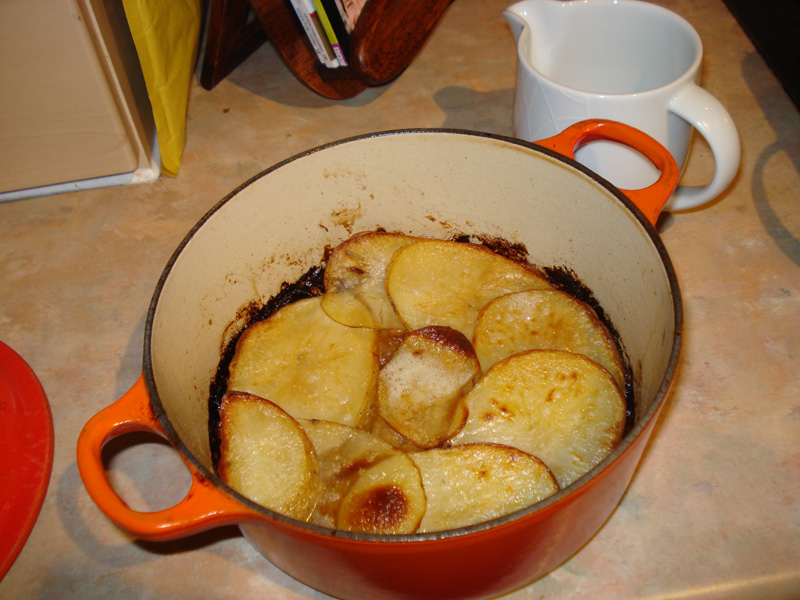 I have a “go to” Lancashire hot pot recipe that I like very much, cribbed from Rick Stein some years ago. It’s very tasty, but like many others I was bowled over with Nigel Haworth on the Great British Menu this year, who blew the competition away with his hot pot. (One word or two? I just don’t know. His recipe is here.

I’ve simplified it slightly for home cookery – cut down on the varieties of lamb and reduced it down to just the neck fillet. I also used a jar of pickled cabbage – I can’t better those results. No herbs either, which is a big surprise. I also worried about the lack of liquid in the meal so bunged together an easy gravy of roast vegetables deglazed with lamb stock.

It was very tasty, and I can see why it was such a winner. Rich, gamey lamb, sweet onions with a crunchy potato topping – what’s not to like? My only slight concern was that the recipe isn’t clear about when to use a new pan for frying off the different parts. I browned the lamb in the same pan as it eventually baked in, and it caught round the edges, making it black and sticky. These bits were nice but a touch over. Doing it again I’d use two pans for frying lamb and onions, then put the part cooked elements back into a separate casserole dish for baking. Starting off from cold it will have less chance to blacken. That said, it’s delightful. Pair it with pickled cabbage for a tart contrast.

Who Is The Host Of 'Crazy Delicious' On Netflix? Everything To Know About Comedian Jayde Adams

But, yummy set aside, the host and the judges -- Carla Hall, Niklas Ekstedt, and Heston Blumenthal -- have become overnight sensations in America.