Inspired by a fantastic starter I had at Union Street Cafe, this dish is a great light meal. The porchetta itself makes a fantastic roast joint. The porchetta as a roast serves 4 as a main dish, but save a couple of slices and serve cold for this recipe which would make a perfect starter portion. 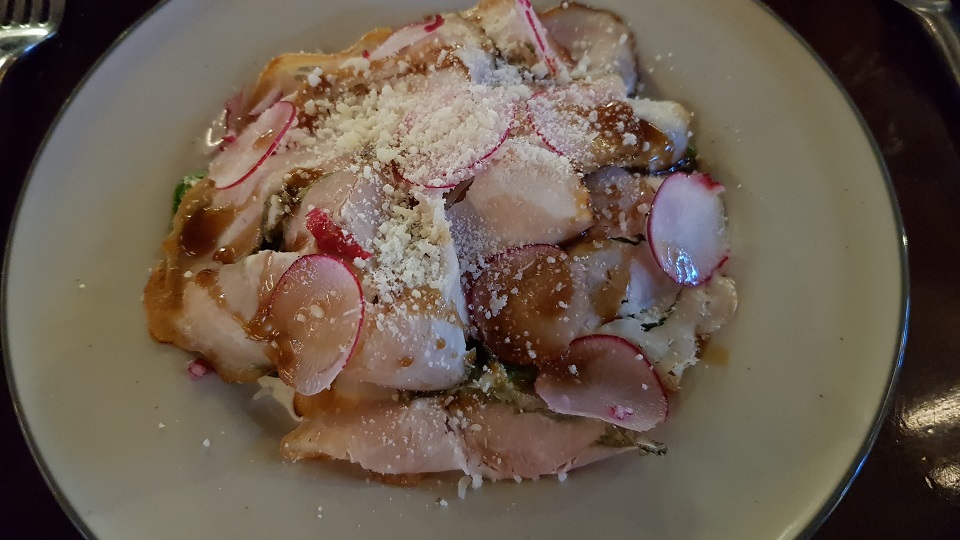 A light and tasty starter plate of food made with wafer-thin slices of porchetta. The radish was gossamer-like, and the gentleness of the parmesan made it a refreshing dish. It was part of a celebratory meal I had at the Gordon Ramsay restaurant in the Southwark area of London. It has a breezy, laid-back atmosphere with lots of mid-week specials (if you want high-end, try Petrus) and has the feel of a trattoria. We had a great meal, sampling the gratinated eggs (would be perfect for brunch), a fresh, summery sea bass with new potatoes, roast chicken with pea puree and lots more. The focus is on fresh seasonality, with the menu changing quickly as stock becomes available.

I’d also recommend asking to view the kitchen – I’ve never seen such jolly chefs happy to see you and carry on with service!

Anyway, back to the porchetta dish. Porchetta is an indulgent stuffed pork loin, often flavoured with garlic and lemon turned into a stuffing and roasted like a Sunday joint. It’s well worth trying. But I wanted to take this and try my starter with thick slices of roasted pork. It’s just as tasty but more satisfying, taking it in a different direction

porchetta with parmesan cream and spinach
Yum
Ingredients
For the porchetta:
For the garnish:
Servings: people
Instructions
Recipe Notes

Always test roasting joints with a probe thermometer. They're dead cheap and the safest, surest way to prevent over or undercooking. Buy one from Amazon.

10 Country Dining Spots To Inspire Your Next Day