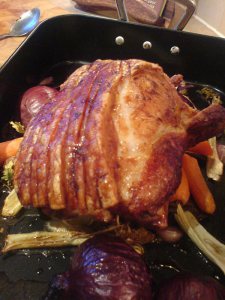 Delicious, savoury roast pork. The porky prince of Sundays. Except I had this on Saturday. Er…..

I watched Jamie’s programme on British pork, and immediately raced out for some Freedom Food British shoulder of pork from Sainsbury’s. Can’t recall ever having roast with shoulder before, usually loin or leg. So it was an experiment.
Following Jamie’s recipe, I scored the fat for crackling and smeared it with coarse salt. It went in the oven on a very high heat, then after half an hour turned it down to a normal-ish 180C. At this point the skin was all puffed up. After another hour I piled the baking tray with celery, carrots, red onions, sage and bay and plonked the pork back on top. After about another hour and a half the pork was as above, golden-dark and dripping with flavour. Crucially it was also possible to pull the meat apart with fingers – therefore done. I put the meat to one side and covered with foil to rest. (I didn’t actually eat it for perhaps another hour and a half).
Meanwhile the tray went on the hob and I put a splash of Marsala in with the veg, scraping away to get all the yummy black bits off the bottom. Once reduced I added veg stock and stirred until I was left with a thick, rich dark gravy. After pushing through a sieve I had a gloriously savoury meat juice.
Served with cabbage, carrots and – what else? – roast potatoes, it was great. Nice one Jamie – support British pigs!