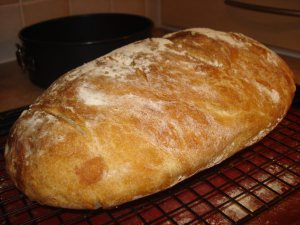 Is there anything more honest, rewarding and fulfilling as baking your own bread?
It almost seems like alchemy – magic even – to go through the whole process. And it’s so sad that we don’t either subscribe to the French model (new bread every day) or that making your own seems like such an unusual prospect. It’s so not difficult, and at least a million times better than anything you’ll ever buy. 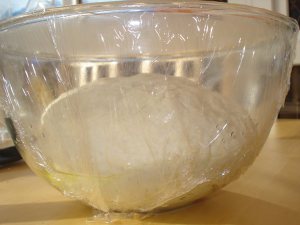 A kilo of flour mixed with 14g of yeast (two of those handy little sachets), 20g of salt (for flavour), a pinch of sugar (food for the yeast), and 600ml of tepid water (party bath for yeastlings) gets you started. I often have to add water or flour to get the right consistency. Once it’s all sticky and malleable it gets a thorough kneading on a floured surface to encourage gluten formation. Then it’s left in a bowl in a nice warm place for an hour to let the yeast get it’s party started. 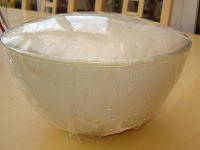 After about an hour it should have doubled in size. Now it needs pushing the air out and forming into the desired shape. Roll-size, tin loaf, squat thing.. whatever you want. Leave this again for another hour to settle down, dust with flour if you like, then put in a preheated 250C oven. Once it’s in there it can calm down to about 200C.
Every loaf cooks the way it wants to, and a time can never be prescribed. The best advice I ever heard was from Nigel Slater: lift the bread and tap the underside – it will sound like a hollow drum when ready. In the meantime, it will fill the house with that clichéd “house-buyers love it” smell. You’ll be desperate to gnaw chunks off it straight from the oven, but I promise you, half an hour’s rest will make it sublime. And you’ll feel like a King for making it. Just great.