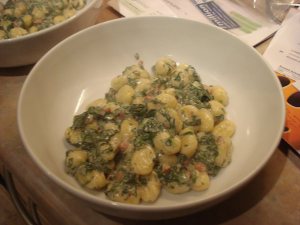 Anywho, it’s dead easy. First I fry some spinach with a little sliced garlic until all straggly, then season and add nutmeg before removing to one side to cool. Once it’s cooled I squeeze the juice out and chop finely. Meanwhile I’ve some gnocchi on the boil (note: I made gnocchi myself once – it so wasn’t worth the effort, nor the washing up). Then I fry some pancetta in the same pan, and once crispy I throw the boiled gnocchi in the pan to absorb some hammy flavours. Then the spinach is back in to warm through, finally some creme fraiche, salt and pepper, a touch of parmesan (I added too much the first time) and it’s done. Creamy and extremely filling.
an interesting gnocchi recipe
Yum
Ingredients
Servings: people
Instructions
Share this Recipe