All the years I’ve been blogging, and I’ve never entered Belleau Kitchen’s random recipes challenge. It’s been running for a long old time, and I met Dom over three years ago during a Sainsbury’s campaign, for which I blogged a cottage pie. I decide to enter his challenge this month, and what do you know, I turn out a similar recipe for this as I did for that campaign – a crunchy polenta shepherd’s pie! The power of random, eh?

This recipe came out of The Best, a fairly under-the-radar show that I really loved. It starred Ben O’Donoghue, Paul Merrett and Silvana Franco. I’ve always loved Silvana’s recipes, and found her to be so inventive and accessible. Paul was approaching things in a fairly cheffy way, and Ben brought the Southern Hemisphere influences that set his dishes apart from the others. Dom’s Random Recipes theme for this month is books that need rehoming – I’ve had this book a long time, and while it’s full of great things, the useful recipe quota is used up. After 12 years I think I’ve extracted all the goodness from it. So here’s one last hurrah.

It’s Ben twists that are evident here with his crunchy polenta shepherd’s pie. Instead of a mash topping, the wonderful polenta is used in it’s twice cooked formed: first hob-cooked, then allowed to set so it can be cut into shapes ready for grilling. 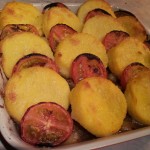 The polenta recipe itself was slightly out – I would’ve added a dash of milk and a bunch more seasoning to liven it up, but the recipe challenge is all about doing “as is”! But the addition of tomatoes interweaved with the polenta slices gave lovely bursts of freshness that was very welcome. Under that it’s classic shepherd’s pie really, leftover lamb braised with mixed root veg. And there’s nothing wrong with that.

This recipe is entered into Belleau Kitchen’s Random Recipes #39 challenge.