Just the other week I was bowled over by Jamie’s empire chicken. I was also taken by his prediction that if you ask the British public what their favourite meals are, they’ll say “roast chicken” and “a curry”, hence his Imperial mash-up. But my mind wandered to that other pinnacle of British food, the fish and chips. What would this look like as a crossover?

As it turns out, hilarious fun. Spicy yet familiar. 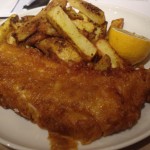