Isn’t it strange how two Western cultures can create their own version of the same imported cuisine? “Moo shu beef”, “egg rolls”, “crab rangoon”… What are these odd things? They’re found on menus of most Chinese takeaways (sorry,”takeout”) in America. Yet in the UK they’re completely alien. In my limited understanding, immigrants of different areas started these restaurants on different sides of the Atlantic and imported their food, Westernised: in the US, Hunan-influenced culture settled; in the UK Cantonese-style food dominated. General Tso’s chicken is one of these American staples, as I found out reading this recipe on Serious Eats. What is this? And why does it look so darn tasty?!

I’ll read just about any article by J. Kenji Lopez-Alt. They’re packed with excellent research, brilliant recipes and infectious enthusiasm. But the photo of this one drew me in. I knew straight away it was going to taste good, and I had to try it.

His comparison to chicken tikka masala is bang on – a dish that has become the representative dish of that cuisine, though natives have never heard of it!

Whatever the derivation, it’s crunchy chicken in a tangy-sweet sauce. It’s closest cousin on an English Chinese menu (if you follow my train of thought) is crispy chilli shredded beef.

I didn’t fancy breaking out the deep fat fryer so adapted the recipe for the Actifry. The fridge-drying phase is important – if you leave the chicken damp from batter it will slide straight off in the Actifry. The drying out allows the coating to properly adhere to the meat. It turned out brilliantly. The chicken was crisp yet juicy, the sauce was sticky, sharp and tangy, the whole thing comes together perfectly.

I think I’m going to go pester my local Chinese to add this to the menu.

Based on a recipe by J. Kenji Lopez-Alt at Serious Eats, tweaked and abused for my tastebuds 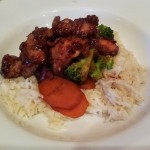