lamb with cous cous and courgette 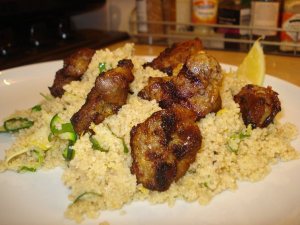 Inspired by a recipe in last month’s delicious magazine, this faintly Moroccan dish seemed too tempting to pass up. I love an excuse to eat lamb, which can often take too long to cook, so when I find a snappy lamb dish difficult to ignore.

I got some lovely lamb neck fillet, all chunky and packed with lambiness. This was smeared in a yoghurt-spice mixture and left alone for a while. The spice was supposed to be a Moroccan-style infusion but due to a kitchen mix-up got blended with my garam masala (gary masala…) which I’ll get to the recipe for one day but rest assured it’s fairly standard Indian-y blend of cumin, cinnamon, chilli, pepper, fenugreek…

The nice and sloppy marinated lamb was griddled to brownness and then left in the oven for ten minutes whilst the other stuff went on.

The cous cous was steeped in boiling chicken stock, lemon zest and butter and left covered to absorb the flavours. Meanwhile, I griddled razor-thin sliced courgettes a coupla minutes a side to get those attractive dark lines. Five minutes later, I’m adding lemon juice, chopped coriander and the browned courgettes. Tumble it onto plates, dot with lamb and serve with lemon wedges. Not difficult at all, but filling, tasty and very nearly healthy.