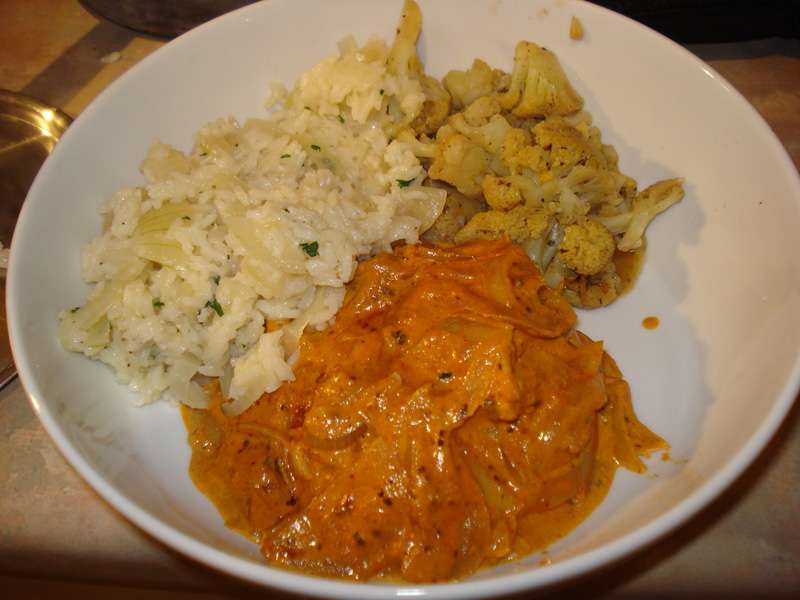 Every couple of months I get the urge to make another curry, and I’ve made plenty in the last year. It was a Saturday dish, so I had to time to put a little effort in. After a little research I settled on Jamie Oliver’s chicken tikka masala from Jamie’s Dinners

. I still had some garam masala left over from a Heston-inspired blend some months ago so that was going to be my main spice base. Also with recent experiments in brining being met with a great deal of success I had to stick some brining in as the first stage. You could skip this bit if you wanted to, but I love the moistness and depth of flavour this imparts.

I wanted a vegetable side-dish and love the way cauliflower absorbs curry flavours. The key for me is to almost overcook it – a soft, squishy floret bursting with spice is the way to go here.

Plain rice is always sniffed at in my house so I have to be creative with it. I remembered a delicious rice dish by the cuddly Nigel Slater, from my most favourite of his books Appetite

. I’ve eaten it before just on it’s own, but gently pared down it makes a tasty – yet interesting – bowl of rice.

The curry itself was time-consuming (aren’t they all?) but thankfully very, very tasty. In fact about the most ‘authentic’ (yes, of course I mean authentic to that you find in a takeaway) tikka masala recipe I’ve eaten. Creamy, nutty and boasting spice from within. The cauliflower was a tasty foil for the curry, with aromatic rice to back it up. (On a side note, both Jamie’s and Nigel’s recipe called for at least 1 chilli in each – we’re not so crazy about super-hot things in our house, so I’ve omitted them to let the spices speak for themselves. By all means chuck some in if they’re your thing).

For the tikka marinade:

For the masala sauce:

1 head of cauliflower, cut into small florets to cook evenly