This post doesn’t have a glamourous title, but it’s a question that’s been bugging me for a while. Why do so many recipes for pizza dough say “use plain flour or strong bread flour”? They are very different flours for very different uses. So how do they both turn out?

There is an ulterior motive behind researching this. I’ve been cooking a lot of pizza lately*. The reason is I bought a wood oven for the garden. I’ve been after one for years and never committed: I went back and forth on buying one, building one, renting one… finally I settled on it. The La Hacienda Lorenzo Pizza Oven is a tidy little unit. Standing a little over 1.5m tall it’s not too imposing, and has enough cooking area to bake one 15cm pizza at a time.

The other reason for asking the question is… well in the current UK lockdown flour is a tough commodity to get hold of. The issue is not about producing enough, but the logistics of bagging it in domestic portions. Everyone it seems, has decided to have a go at baking bread, cakes and all sorts. Laudable, but it is making flour hard to come by. Strong flour, the old friend of baking bread is especially difficult. However wiser people than me such as Jack Monroe are adamant you can get as good results with any old flour. This makes for an even more intriguing question.

They were baked to the same method: 400g flour, 7g yeast, 1 tablespoon salt and a dash of olive oil. The dough is thoroughly kneaded, rested for an hour, shaped, rested for another hour, then baked in the pizza oven at about 300C**.

I have loads of pizza recipes here. The Heston pizza recipe makes for interesting reading. 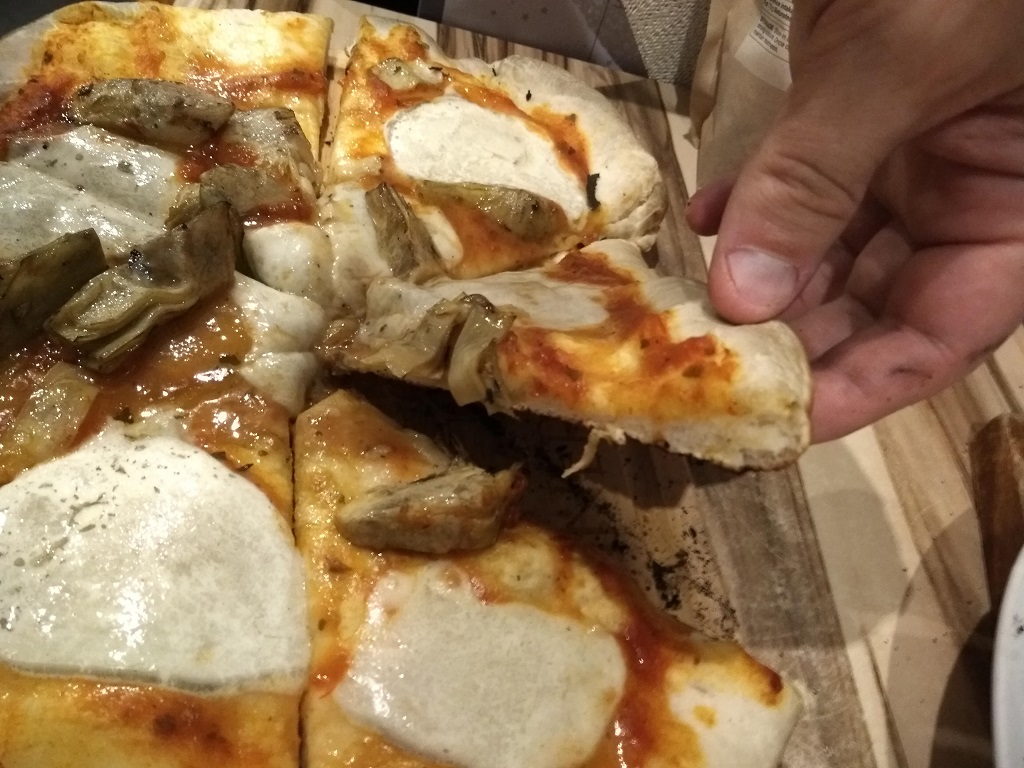 Pizza base baked with plain flour

This is the pizza base baked with plain flour. You can see bubbles and air pockets, with a pleasing crunch to the base. A little snappy and a decent rise.

Pizza base baked with strong flour

You can see much more volume in this one; air bubbles have been trapped and held in the dough as it baked. It’s chewier, with slightly less crunch and has a more pronounced ‘bready’ flavour.

So what’s the difference? It’s worth stating outright that both are delicious and will definitely qualify as pizzas. The strong flour has a more complex flavour, a rich and yeasty bread flavour that stays in the mouth. The plain flour gives a slightly chewy but crisp pizza with less rise.

There’s not a great deal in it. They make different kinds of pizza base. If you prefer yours more thin and crisp, I’d go plain. If you prefer a bubbly bread, go strong.

*You’ll notice all sorts of pizza photos in this post. This recipe was thoroughly tested, so I tried all sorts of mixes and toppings.

**Proper clay pizza ovens with stone floors get well over 500C. The shape and dome nature of these makes cooking these very straightforward. With this more ‘barbecue’ style pizza oven, cooking at this temperature burns the dough too quickly as the flames don’t have space to go anywhere. The heat is too direct. I cook at around 300C to get the combo of fast hot air rising and char with even bake.

***A note on 00 flour. This is a finely ground flour generally used in pasta recipes. It can also be used for pizza dough as with other recipes. It goes a stage further than the plain flour, creating an even more light and crisp base.