Spoilers: it was great.

Gordon Ramsay the character is not a very appealing person but that’s a shame as it can mask what a bloody good chef he is. There’s a number of his techniques I turn to first when cooking: his Wellington, his scrambled egg, his duck breast. I rewatched some of his programmes from the early 2000s and despite formatting of the time – jump cuts! Aggressive music! Booming voiceover! – his presentation style is confident yet assuring, ‘you can do this, just follow along.’ I wish he did more straight food programmes, but I guess the drama of his ‘reality’ shows probably pays the bills better in residuals time after time.

Pétrus is Michelin-starred dining with a French inspired menu. It’s in Knightsbridge and wears this on its sleeve: subdued entrance, glass wine room, lush carpet. But despite the opportunity to be stuffy, instead it feels extremely welcoming.

I had a landmark birthday recently, and was treated to dinner here to mark the occasion. On a weekday we were given the option of the tasting menu or a la carte. I love a tasting menu, but seeing a take on Black Forest Gateau on the a la carte sealed it immediately. It’s my favourite dessert by some distance and I will pick it above everything.

Some amuse bouche to start: crab cakes, puffs of fish so light they disappear. Then an earthy pea veloute, topped with a buttermilk foam. The acidic hit here is perfect. 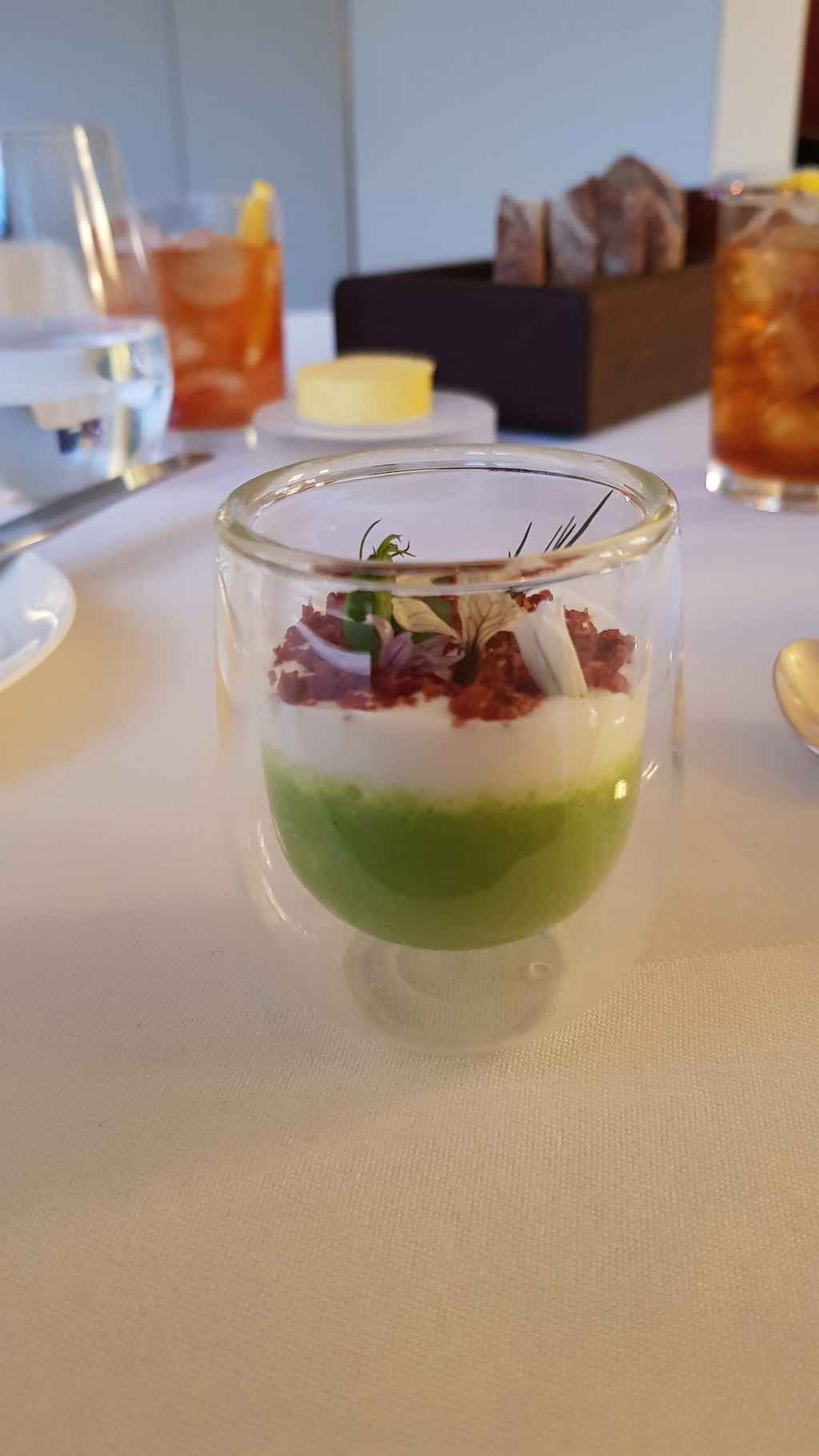 Then bread. I could’ve eaten this by itself all day long. Sweet, savoury, moreish, chewy, crusty, slathered in creamy salted butter I desperately wanted another helping but wanted to save myself! 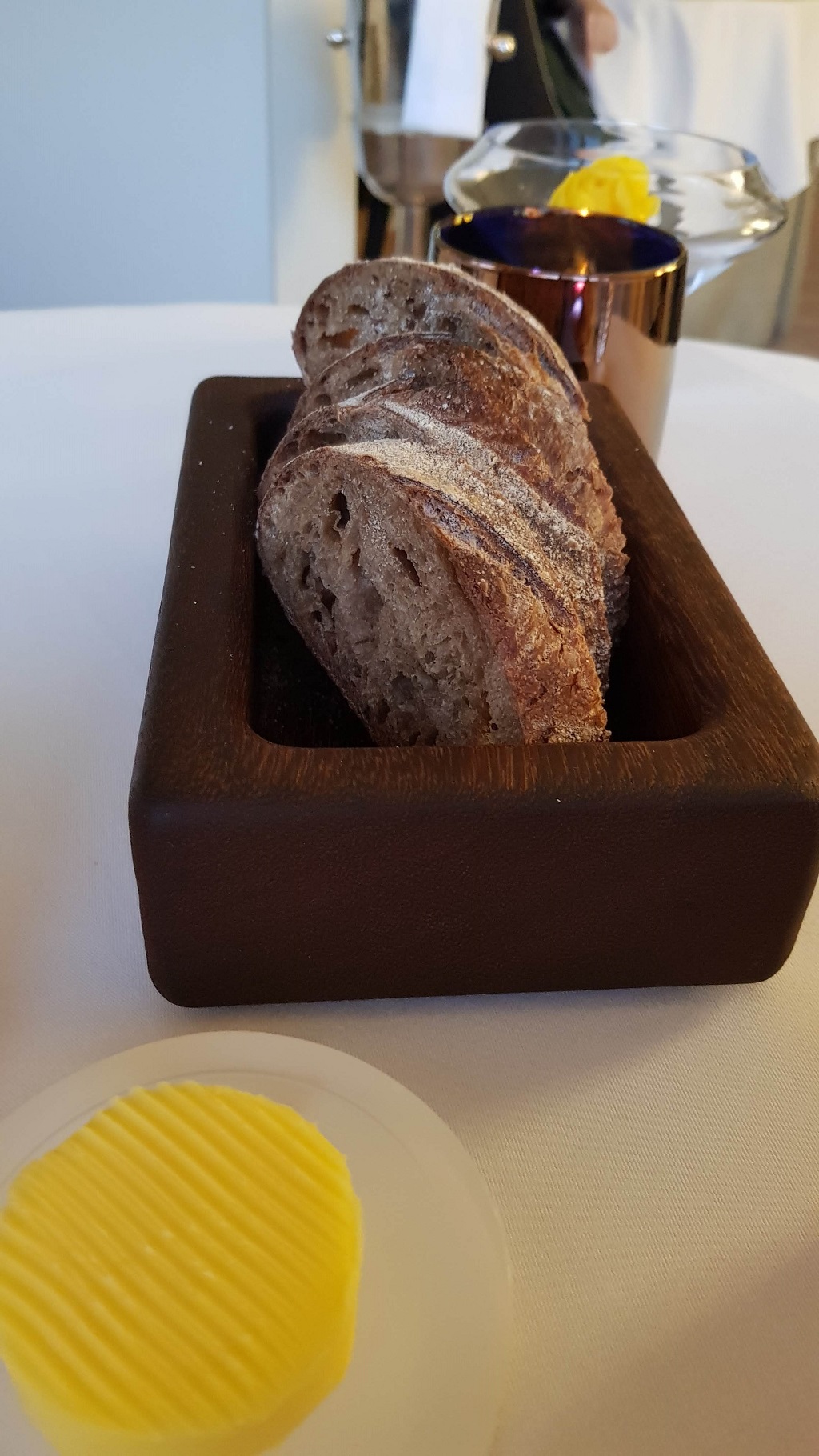 Starters proper then. I had a tian of crab, dressed with sour apple and radish. Very good, but I immediately had starter envy when my dining partner had dish of the night: scallops on bacon sabayon. 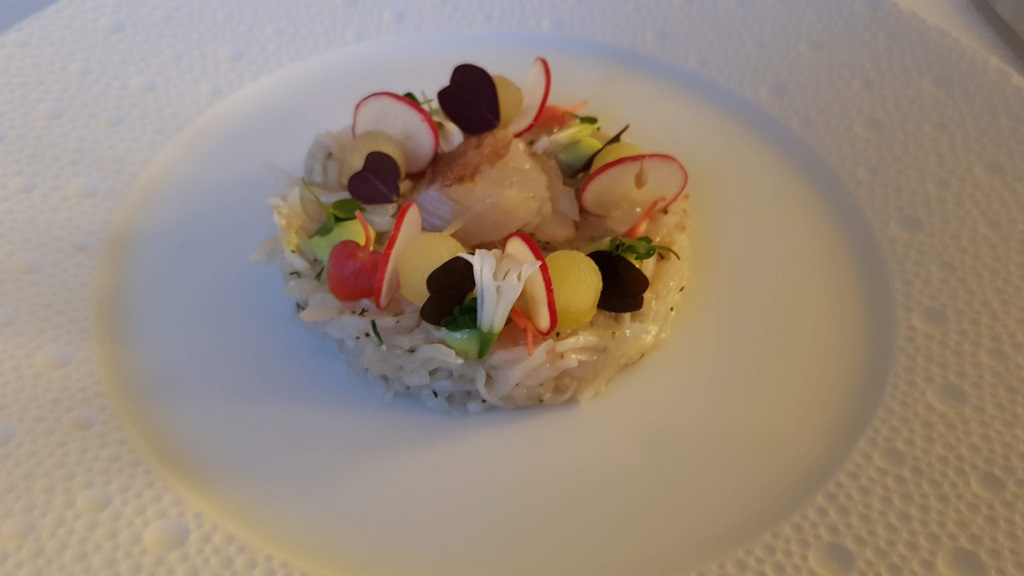 What a triumph. A fat, juicy scallop perfectly browned outside but melting in the middle. A savoury konbu dressing with a huge savoury punch. A scattering of grassy chives. But the sabayon was out of this world. Like diving into a custard tasting of bacon, I could’ve lapped up bowls of the stuff. Seriously clever cooking. 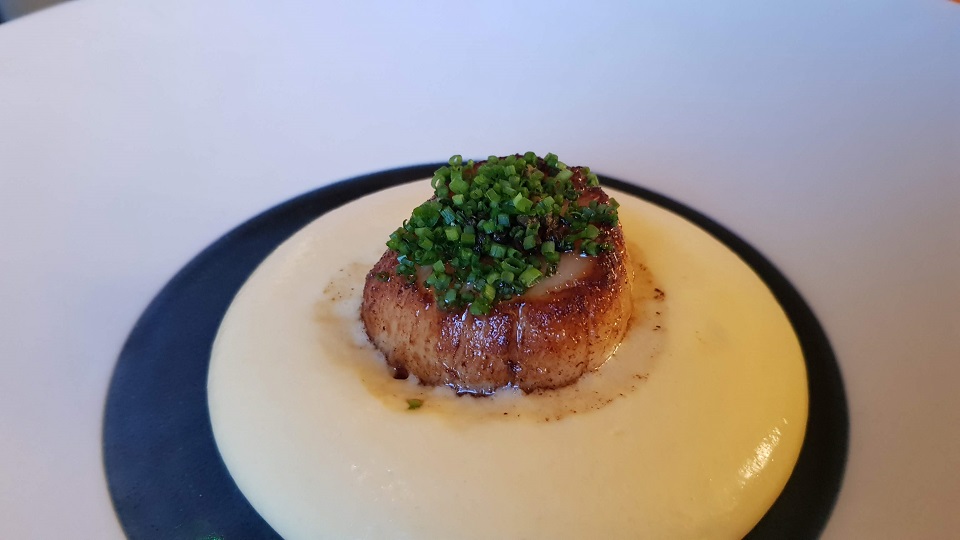 For main course we both elected for fillet of beef with ‘charcuterie’ sauce, a new one on me. Kinda like a pastrami sandwich in sauce form; a rich gravy with pastrami and gherkin. It was everything you want from fillet of beef, loose texture, huge umami hits and little sweet notes from the scattered onion leaf garnish. 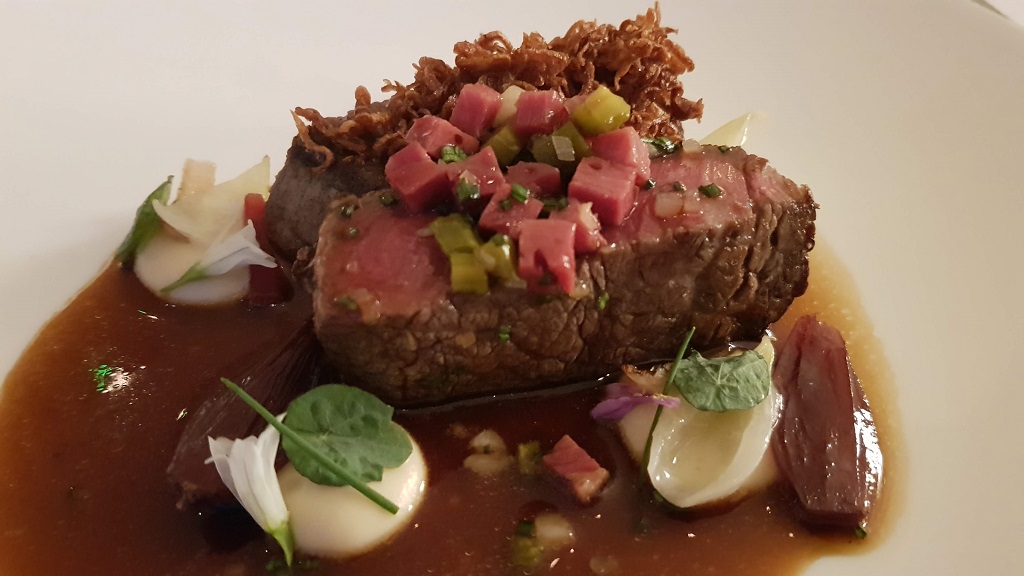 At dessert it all went a bit bonkers. Having clocked it was my birthday they served the aforementioned Black Forest (excellent), along with a rum baba (boozy) and a birthday teacake (rich). Bloody hell I was full. Even before you pretend we didn’t have two petits fours on top. 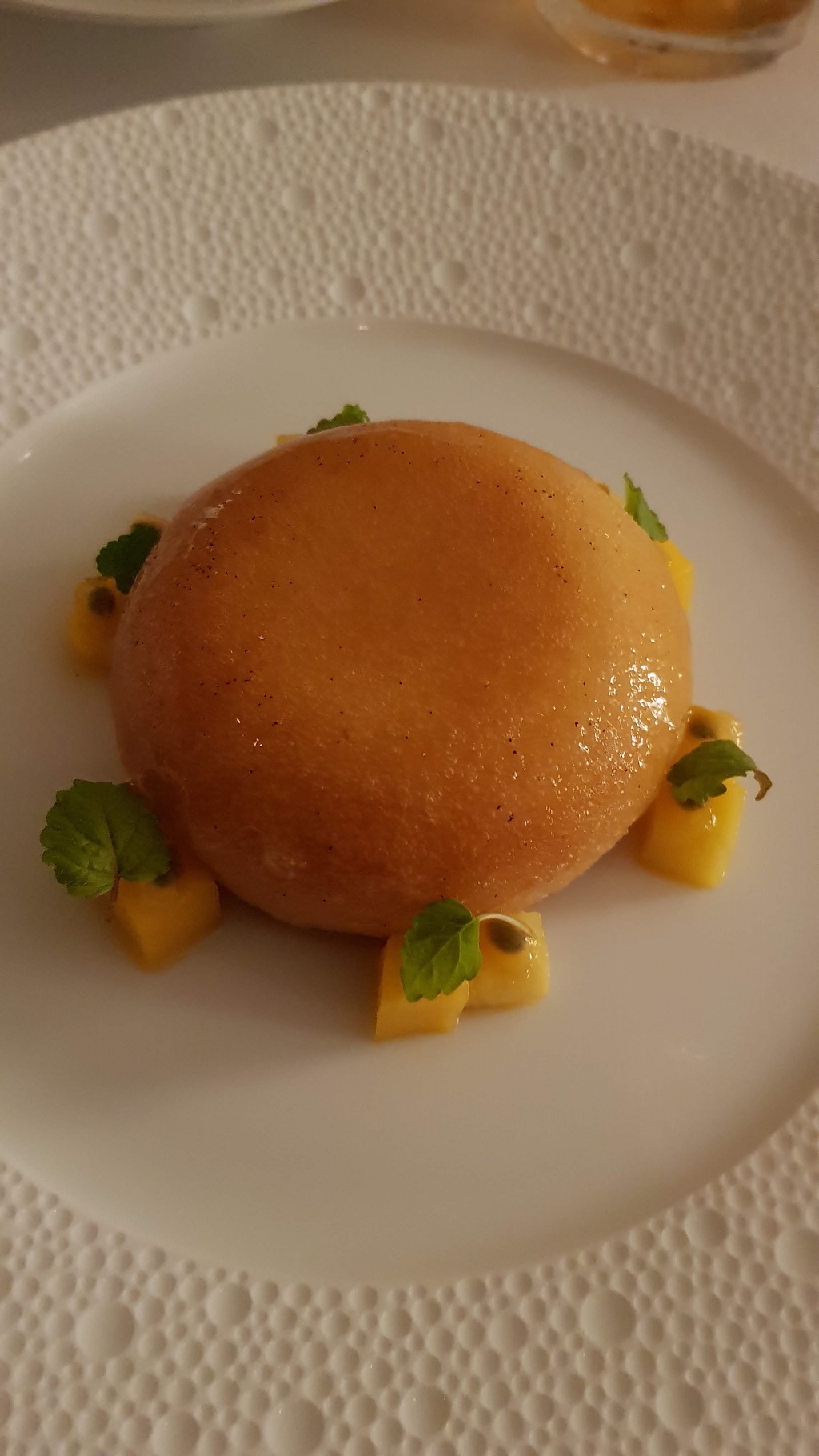 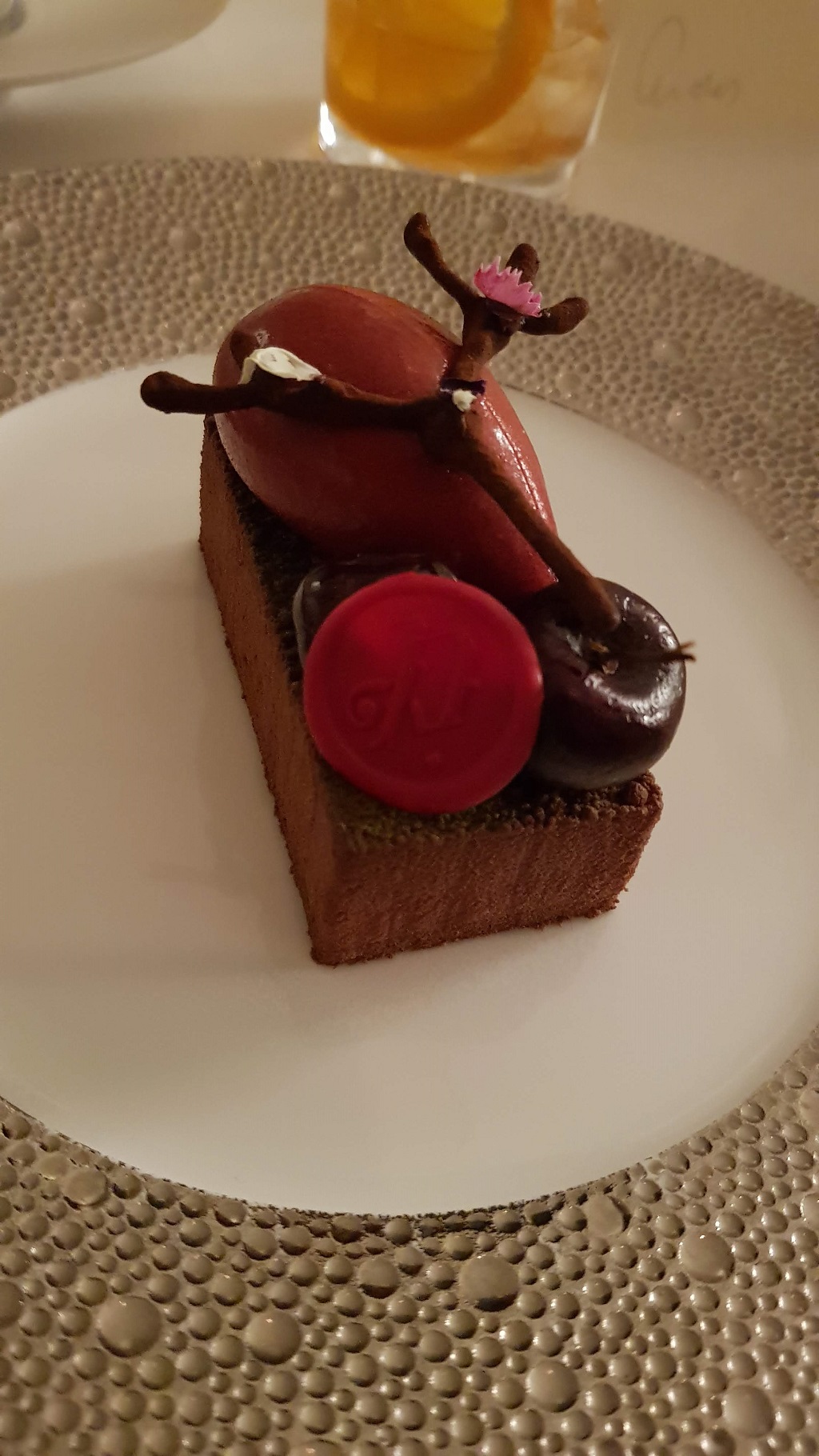 Earlier on we clocked that the head chef was Russell Bateman, and we’d both spent time with him before. He took us on a tour of the (surprisingly small) kitchen and he bowled me over by remembering us meeting him.

You should know, despite writing about food far too much, I very rarely eat at fancy places. So was I taken in by the grandeur of it all? Highly likely. Was I having a great time with my son? Yeah, that’ll influence it. As far as I’m concerned food is 95% atmosphere including your dining guests, so by that logic it was always going to be good.

Check out my take on the scallop dish here.