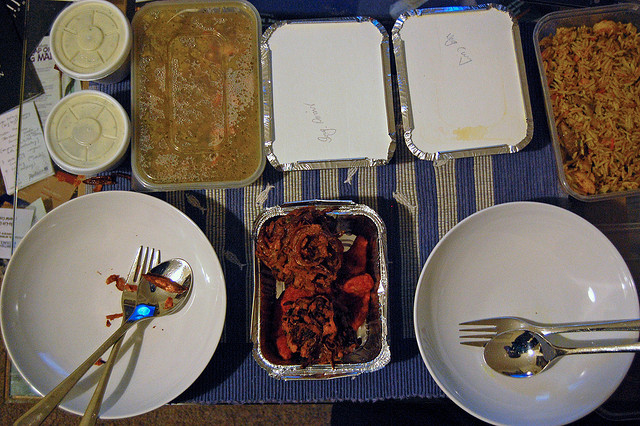 Despite all the recipes listed here like many other people I am a sucker for a takeaway curry. When I lived with my Mum and Dad creeping back home on a Saturday night my evening was made that much better by discovering a plate of leftovers in the microwave.

I’m well aware most Indian folk wouldn’t recognize the food served up at the ‘traditional’ British curry house but I’ve been eating this stuff for most of my life, and whatever culture they derive from I really enjoy “an Indian”. I’m especially a sucker for spiced Tandoori meat, a rich gravy, a crispy onion bhaji and a fluffy, chewy naan.

I was invited to try out Just-Eat.co.uk, an online takeaway ordering service. It’s not just Indians, but Chinese, pizza, kebabs… the usual takeaway suspects. The site is cleanly laid out and dead easy to use. One downside for me is the range of places to choose from is pretty poor, with 11 Indian restaurants and a couple of others. This will vary throughout the country of course but it’s not a massive selection for me. Luckily in this case the one I wanted was there, the Spice Hut. I’ve been using this place for about 6 years and they’re very consistent and I love the food there. By picking a takeaway I’m very familiar with I can review the service as opposed to the food, as I know what to expect. We even had a paper menu to help us all order at the same time.

And the paper menu pointed to another issue: they offer more on the real menu than they do online. There’s a whole section called “Spice Hut Specialities” which Mrs. Spud really wanted to order from, so had to change her order which was a little disappointing. Everything else was there so we ordered our usuals, including their excellent chicken tikka balti. I was then stung by another little niggle: a 40p credit card charge. Surprise charges like this may not be much but they really annoy me, as I could’ve gone direct to the shop and avoided that.

That said, the whole ordering and checkout process was swift and painless, and I even played with the mobile version of their site on my terribly old Android phone and it worked great. I ordered a delivery as a treat (I always collect) and it arrived in 20 mins instead of the prescribed 45 mins, which is a bonus. We ate loads and enjoyed the feast, which was up to their usual high standards.

The site works just great and you can pay with cash on delivery if you prefer, which is a nice touch. I might use Just Eat again if I was in an area where I didn’t know the restaurants – as I knew the place in this case I was aware of the items I was missing and would’ve missed out the (admittedly tiny) charge.