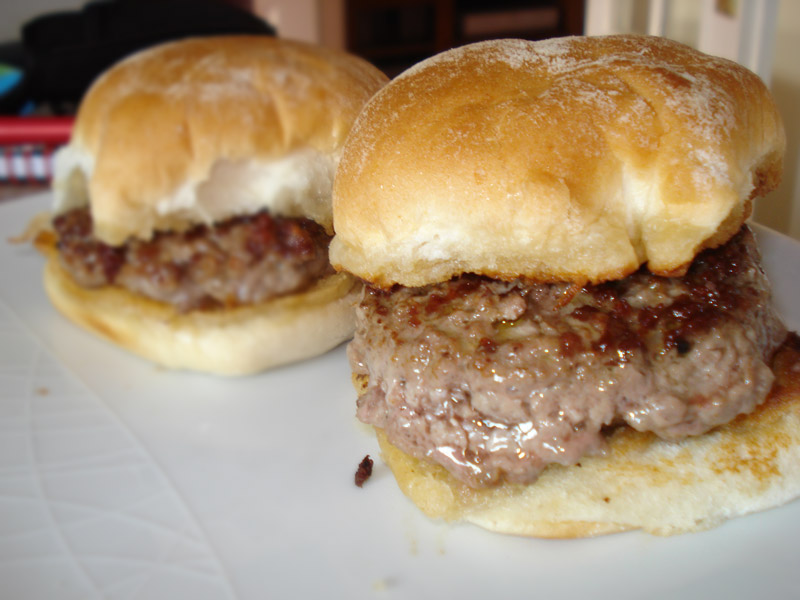 It’s so simple, yet can be so easy to get wrong or fuss with too much. The humble hamburger can be an incredible dish, reminding me of great BBQs, glossy fast food restaurants, and neon-lit New York eateries. This is one of those foods that proves that great food is rarely about the actual food itself, and more about the setting, the atmosphere, and the company. I had a BBQ in January last year, and I bought in the cheapest, lousiest burgers to flip. But in the drizzle, in the dark, they tasted great fresh from the grill.

When I analyse it, I’m after a strong meaty flavour, though this is secondary to the texture, which should be loose and crumbly. And then how you accompany it. The burgers in the pic above are unadorned, though shortly afterwards crispy lettuce, a meaty slice of tomato, a sliver of red onion, a thin piece of swiss cheese and ketchup ended up in the bun. Which is another component in itself; a floury soft bap works best for me. It has to be a vehicle for the sandwich, and not get in the way. The meat’s the star.

I consulted a number of sources before deciding how to go for it this time; I saw Tom Parker-Bowles do a cracker on Market Kitchen last week, and I read every page of Heston Blumenthal’s In Search Of Perfection burger recipe.

The burger mix itself has to be extremely simple: no egg, no breadcrumb, nothing that’s going to get in the way of your beef. It’s beef mince – rump for everyday, chuck / brisket mix for posh – salt and pepper, that’s it. According to Heston, it should be 1% salt to mince. This allows for flavour without too much emulsifying.

So the meat then; for me it was my butcher’s best, with a high fat content to allow it to fall apart in the mouth. Usually I push the patties together by hand however I was lucky enough to be given a burger press by a good friend recently, and this was it’s debut outing. See below! 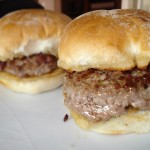 After seasoning, the mince is roughly piled into the press with a wax disc underneath. Another disc is placed on top and then the handle comes down. Out comes a perfectly-shaped burger. And because it’s got wax top and bottom, they stack well without sticking. Another great effect of forming them this way is that the mince isn’t handled as much. When you handle the meat the fat is squished together and the air is squeezed out. What it means in the finished burger is a nice loose grainy texture that allows the meat to fall apart when you bite into it.

I fired them on a large griddle pan (another brand new gift), flipping often to form a consistent brown crust. In the last 30 secs of cooking I brush on some melted butter to give a lovely mouthfeel and an extra layer of taste. It’s humble honest food but so delicious.