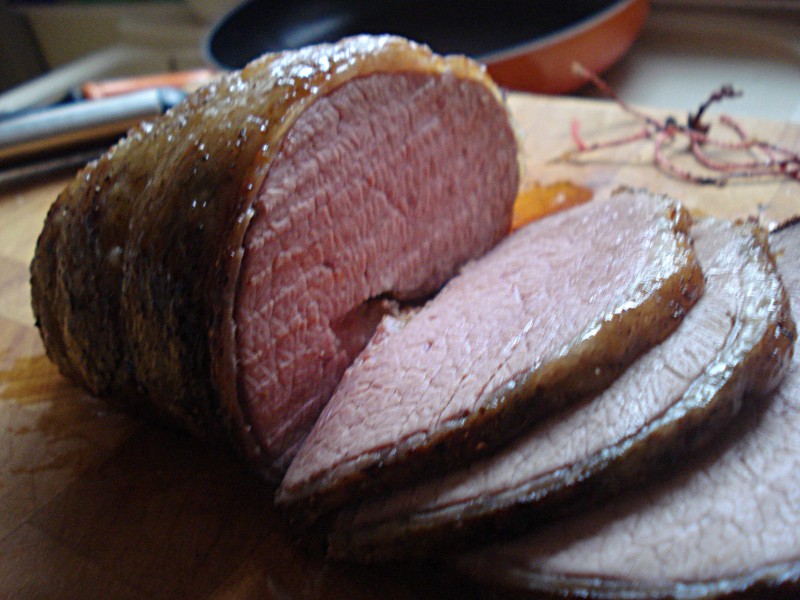 (Let me get this out of the way: the title is a slight lie. But with good reason – read on).

The slow-roast of a chicken as nabbed from Heston Blumenthal is a winner. No question. So why has it taken me this long to transport this idea to beef?

I was finally spurred on to try it by two things. Some dear friends bought me Heston’s Family Food

for a belated birthday present. It’s leagues away from his Total Perfection

series, a more everyday approach to food. It’s quite touching how he talks about how you can explore food with your family, encouraging them to try different things.

The second thing was being sent a Heston Blumenthal meat thermometer. I was so overjoyed at getting hold of one of these I had to cook something that demanded a thermometer immediately. This seemed perfect.

Heston’s recipe for slow-cooked beef favours the wing rib; a little pricey for me. I settled on that old favourite, brisket. But would the same principles apply to a different cut? Broadly I was confident, but I had to be sure. Some searching later I found a series of blog posts from Cuisiniers Kitchen investigating slow cooking brisket.

(You can read all three parts of the ‘slow cooked brisket’ series here, here and here. It’s a lot of words but fascinating stuff.)

In summary, the preferred method was to brine, marinate then cook for less than 24 hours. Past a certain point the collagen ruptures and develops a tougher texture. So I went for a cidery brine for 12 hours, followed by a 12 hour roast at 70°C. Finally a quick frying in a hot pan to give lovely browned

I chucked it in at 7am and took it out at 7pm. A quick prod in a couple of places showed that it was 70°C throughout so perfectly cooked. The thermometer did the job, sturdy enough to stay upright and a very easy to read screen. The temperature also came quickly, something I have a gripe with my current thermometer. As I expected there was little colouring from this roasting and a little puddle of blacky-brown liquid in the pan, which of course I had to try. It was pure Marmite, heavenly umami. There were also an odd rubbery sheet of stuff from one side, which I suspect was congealing blood ‘n’ stuff (why do we only use pig’s blood for black pudding?).

After some reasting and frying, it was absolutely delicious. Crisp, wobbly fat and full-flavoured soft meat that tore apart into lovely flakes. The cider was a surprising touch: when I carved into the meat an appley perfume came off it; in the mouth a pleasing sweetness. If you’re wondering about the lack of seasoning, the brining takes care of that. But the beef flavour was the king. Completely brilliant.

(PS I’ll be exclusively giving away some Heston Blumenthal kitchen equipment to you lovely lot in the very near future, so keep reading!)