Looking for Heston’s roast chicken from How To Cook Like Heston? Read it here

For my most recent birthday, two close friends bought me volume 1 of Heston Blumenthal’s In Search of Perfection

. They were coming round for dinner so I thought it totally appropriate to serve up dinner from these pages. Heston is a genuine influence on me, a real visionary. Everyone rags on the “bacon and egg ice cream” etc but the point of his cooking is to examine what it is we enjoy when we go through the process of eating. What sparks the endorphins, is it taste, texture, smell, atmosphere…? The answer is probably all of these, and this particular book (based on the BBC series) is trying to find the right balance of all these elements to make the ‘perfect’ example of it’s type.

I’m very happy with the way I make roast chicken, so giving myself over to this recipe was task enough. However it’s Hesto, the master, so I’m completely up for it. As you might expect, perfection doesn’t come that swift – the key is in several stages, though none of them are terribly taxing. Essentially there are four stages: brining, drying out, slow roasting, pan-browning.

I fell at the first hurdle; I didn’t get poulet au bresse, the queen of chicken. But I did get a fine free range example from a new butcher I found in Chingford. The first part of preparation was brining: I’ve recently had some real successes with brining chicken so I knew this phase was going to produce succulent, tender meat. As is often the case with Heston dishes there’s some maths to get us going: it’s an 8% brine solution. This involves weighing the pot with the chicken, covering it with water and then weighing it again to work out how much water there is. You can then work out 8% table salt from this measurement. The chicken was then brined for six hours, and then soaked in clean water for a further hour to remove the excess salty flavour. 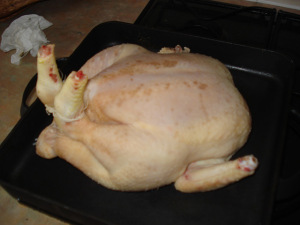 Here’s how the chicken looked after the brining. At this point the bird was dunked in boiling water for thirty seconds before the cooking was halted in ice water. This stage was then repeated – this part is crucial as it kills off bacteria that won’t get eliminated by the slow ‘n’ low cooking time later on. The chicken is then left to dry overnight in the fridge, with a rather attractive clean dishcloth covering it.

The next day was cooking time. The plan is to cook it long and slow on a low heat. Heston says that a raw chicken is 80% water, and roasting is a long battle to retain as much of that as possible. The brining is the first part of that, affecting the meat in such a way as to make it retain moisture. The cooking is unusual: a temp of 70°C for around 4 – 6 hours until the internal temperature of the bird is 60°C. (The oven is supposed to be at 60°C too, but my oven can’t go that low – I could probably force it by cracking the door open but it’s just too random. It’ll have to do.) I have to say, it was utterly terrifying cooking it that low and peering at it through the glass door. It sat there, not leaking any juice, not noticeably colouring. After years of roasting birds in the traditional way of “high heat, turn it down when it’s in” cooking, this just felt wrong. Hour after hour I inserted the probe, the temperature slowly creeping up the gauge. 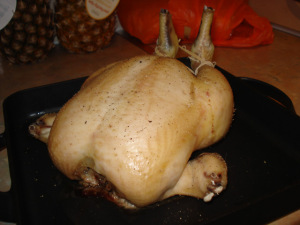 Eventually it reached an internal temp of about 62°C, prodding the chicken all over to ensure an good average. This took about 6 and a half hours. It looked like the picture, barely coloured, a sort of pale gold. However the book does warn that this might be the case. I then left it to rest for an hour or so while I got on with the accompanying broccoli, carrots and roast potatoes. Something else I also did in this interval was to prepare a luscious chicken butter: I’d removed the wing tips and fried them in butter, then discarded the chicken bits. This butter was going to be used at the last minute.

After resting, the chicken is technically ready but the skin is anaemic and not enticing. So there’s probably the most difficult stage here: frying an entire chicken in a pan with brittle skin. I heated my biggest pan as high as it would go, added a little oil and then began frying the chicken with my monstrous barbeque implements, gently turning the bird over and over until it had finally taken on that bronzed appearance that sets the saliva going. Then as a final touch, I used a small knife to make tiny holes and inserting a baster to inject chickeny buttery juice into the flesh of the bird, infusing it with richness and savoury goodness. 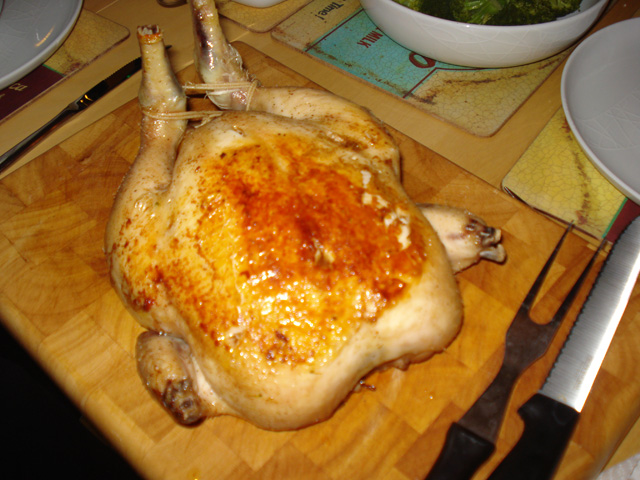 With wild, anticipatory glee I carried the chicken on my stoutest chopping board to the table and carved to order. Was it worth it? Should I have slaved all these hours for any gain at all?

Everyone agreed, many times over, that it was the best chicken we’d ever had. Unfortunately my pictures of the served meat didn’t come out. The carving was practically non-existent, no hacking or sawing here. The meat still very firm from having lost none of it’s moisture. And the flavour… it was richer and more intense, and the chicken-ness filling the mouth. It was a superb bird indeed. My friends were still texting me a day later to compliment the chicken. So I think it was worth it. Note I didn’t season the chicken at any point other than to add a little pepper before roasting. That said, some of the meat near the bone was quite ruby-pink and a little disconcerting; I’m not entirely sure why. I’d like to try a variation though next time: keep the brining, keep the last-minute basting but cooking with regular semi-fast roasting. That might well be a perfect combination of techniques.

One puzzling omission though: this is a ‘perfect’ recipe yet there’s no mention of gravy. Yes the meat is totally moist but the gravy is a wonderful unifier of the roast dinner, it brings everything together. You certainly couldn’t make it with juices from the pan; there was a teaspoonful in the bottom of the tray. I couldn’t fathom a roast chicken without some so I roasted off some root veg and added stock to have on the side.

Footnote: for those queasy about internal bacterial temperatures and the like, Heston published an article on how 60C held for 12 minutes can kill pathogens.

A chicken, as good as you can afford