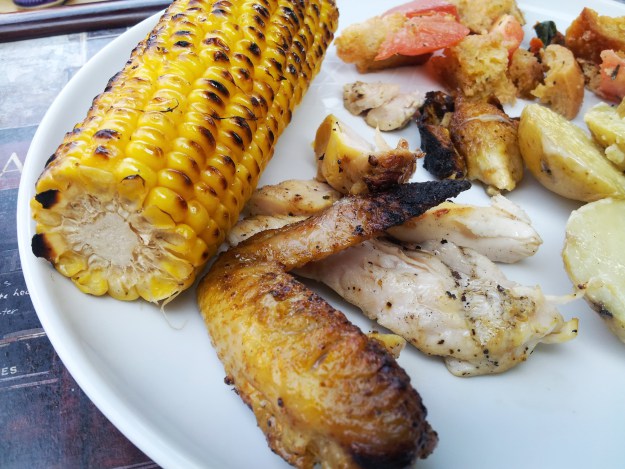 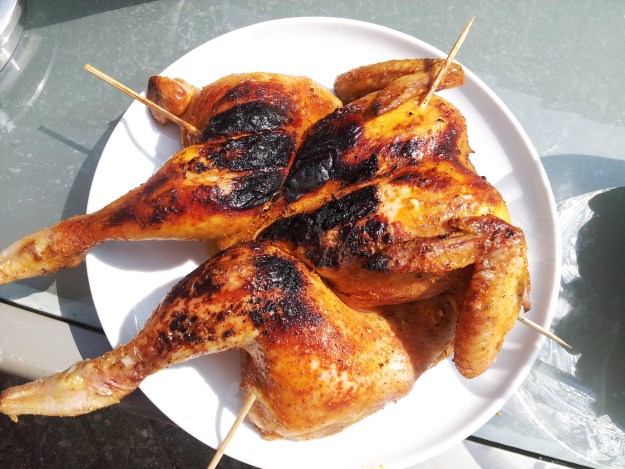 For Mrs. Spud’s birthday and the weather hitting decent heights at last, I wanted to come up with a BBQ featuring some special treats. I thought about cooking a whole chicken and grilling some sweetcorn.

Thankfully experimenting with the barbecue is really taking off in this country. We’ve always lacked the predictable weather and sustained dry spells to really explore but we’re gradually catching on. The explosion of diner-style and burger / rib joints, with even Jamie Oliver getting in on the act is further proof of the growing interest. In particular it’s worth listening to our American cousins who pretty much have nailed down this cuisine as their own. With dozens of regional variations in cut, technique, rub, baste and flavouring there’s plenty to study. If you want to know more about American BBQ I recommend checking out Steven Raichlen, and I strongly recommend his Barbecue Bible book which is packed with great inspiration. It’s from this book that my chicken recipe started to take shape.

all rubbed, ready for the fridge

I’ve had fun with dry-brining before. The meat juices are drawn out by the salt element, the flavourings dissolve in the liquid that breaks down muscle proteins and get reasorbed back into the meat. The repetition of this process leaves the meat wonderfully seasoned and keeps it juicy, so I was definitely going to use something similar here. Pulling together some of my favourite spices to combine into a rub I left the chicken overnight. In honour of my corner of the country I’ve called it Southeast style. Spatchcocked to cook reasonably quickly and evenly, and allowed to scorch on the BBQ it gave a smoky, sweet flavour with spicy depth. Really tasty. And my top tip for grilling white meat? Get one of those spray bottles from a garden centre. Fill it with apple juice, and with one squirt you can cool off flare-ups and leave behind a sweet glaze into the bargain.

I paired it with some grilled and braised sweetcorn. With undertones of Bourbon and meaty to boot, my first attempt at barbecuing corn was one I’ll be doing again.

Grated zest of ½ a lemon

For the sweetcorn gravy: