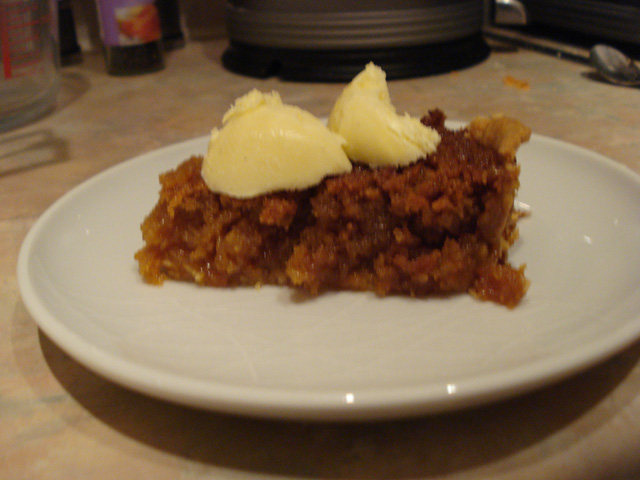 I’ve tried treacle tart on this blog before, and was somewhat disappointed with the results. I should’ve gone with my gut and cooked Heston Blumenthal’s recipe as described in In Search of Perfection

. This was set to be the dessert that followed Heston’s roast chicken. It sounds like madness to attempt two of his recipes for one dinner, however neither are labour intensive, just requiring dedicated amounts of time here and there.

I won’t bother listing the full recipe – Heston himself has listed the method here. I did however make some significant tweaks: I’m not a great pastry chef (big hot hands are not useful implements) and I had enough to do so I bought some of Sainsbury’s ‘dessert pastry’ enriched with extra butter and sweetness. I also have to admit to not ageing the treacle, but used as is straight from the tin.  It’s a fairly straight forward affair; heated syrup is blended with eggs, cream, lemon juice + zest, melted butter and brown breadcrumbs then poured into a blind-baked pastry case.

The results were absolutely fantastic. Heart-stoppingly, incredulously good. This is exactly what treacle tart should be. A crisp and melting base giving way to dense, hyper-sweet filling that bounces along with gingery-style spice and zesty flavours. But the real genius ninja touch is the addition of vanilla salt – literally vanilla seeds and sea salt mixed together – as a last-minute sprinkling garnish. When it hits your tongue that salty falvour dissipates and blooms a perfumed aroma that hangs around as you chew through the immense treacley pleasure. It’s utterly superb and I’ve run out of adjectives to get it across accurately. Please try it.

(PS. as a complete aside, the Sainsbury’s pastry was really good – very light and just sweet enough. I definitely recommend it if you’re in a hurry).

The next day it was somehow better – the bread had congealed to a christmas pudding style texture. Heavenly.

I did make some of my own ice-cream to go with this. I wanted a compromise between clotted cream and ice cream but again, wanted to cut down the work a little. So I used good quality shop-bought custard to kick it off. This too was a great accompaniment to the dense flavours. I didn’t even bother with the frequent stirring – just left the bowl alone in the freezer and the ice cream was beautifully textured.