perfect toad in the hole with onion gravy 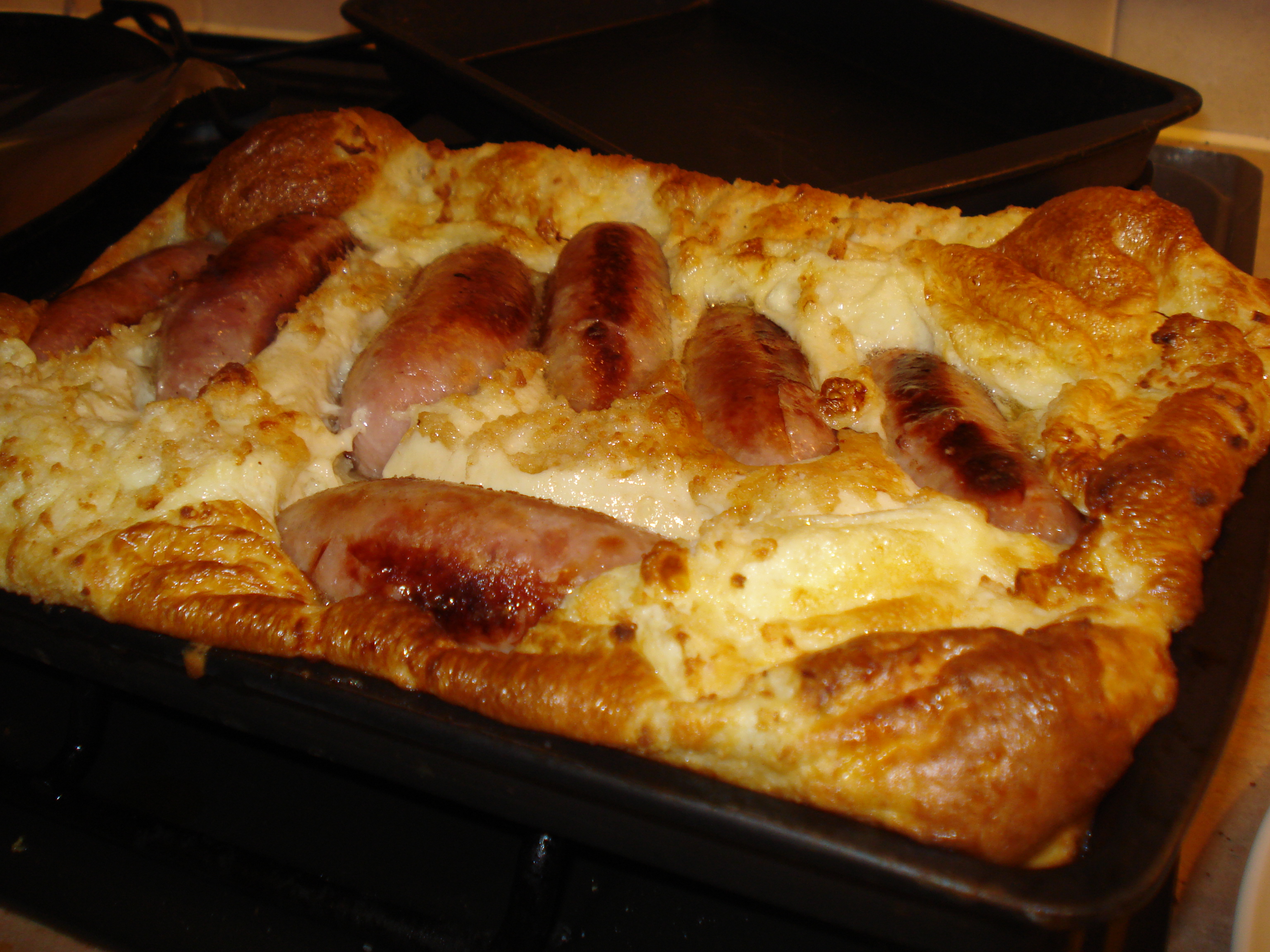 toad in the hole

What would Heston do?

This was the question that leaped to mind – and stayed there – when I first read about Amuse Bouche’s post challenging food bloggers far and wide to cook the ultimate Toad in the Hole. For those not in the know, Toad in the Hole is essentially sausages baked in batter. The batter is a Yorkshire Pudding batter, also known as a ‘popover’ in other parts of the world. I felt confident in giving this challenge a good go, as Yorkshire Puddings are something I’ve made since I was very little. My Mum always did a roast for Sunday lunch, and I was in charge of Yorkshire Puddings, often tweaking by adding other bits like stuffing mix or onion powder, but never deviating from the core batter recipe. It’s a recipe I’ve always remembered, and have had people request I bring the batter round to theirs to help with their roasts. It gives me a source of great pride.

When it came to this idea however, I felt it was time to re-evaluate what I knew about this. I thought about how Heston researched his In Search of Perfection

series: to look at what people expect, and then how best to co-ordinate the meal to bring it together to something approaching personal perfection. When we’re dealing with such a well-known dish as this, I figured his take would be the way to go. To kick it off, what do we start with? There are three elements to come together: the sausage, the batter, the gravy.

The sausage would be relatively straightforward, I don’t have the facility to make my own so it would be a case of buying the best I could afford and doing it justice. A butcher in Chingford does these wonderful onion-flavoured pork bangers -what could be more appropriate? I tinkered with the idea of skinning the sausages and rolling the meaty lumps in crushed fennel seed, but while tasty it started to drift away from Toad in the Hole as we know. So the soss stayed safely in their skins.

With the gravy I wanted to reinforce the pork flavours, so roasted off some pork bones with root veg, then mixed with flour and water to get a thick gravy stock base. Adding more water and seasoning to this at the last minute would make a meaty porcine jus.

And then the batter. Little did I realise how much research could go into this; there is hot debate everywhere as to what is the perfect recipe. It should be puffy and risen, with a slightly eggy chew to the centre. The top should brown deeply and provide a satisfying hollow crispiness. How to achieve this contrast of chewy and crisp then? Delia has her own ideas, so does Yorkshire-born-and-bred James Martin, even the Royal Society of Chemistry has published a woefully unsatisfying guide on Yorkie perfection. After reading dozens of articles, I experimented with a range of batters to achieve the perfect result. I laid out a tin, and poured different mixtures into 12 indentations. There were different concentrations of egg, varying amounts of flour, some with baking powder, some without, some had stood overnight in the fridge, some had stood a shorter time, some stood no time at all. Some had fat pre-heated, some hadn’t. The results were surprising.

When it comes to flour, the evidence points towards the cheapest, nastiest plain flour being the best. So those supermarket brands in their worst packaging will be perfect. I imagine it’s the lack of active gluten, as the strong flours create far too bready a mix. Baking powder seemingly adds nothing (possibly even suspends growth) so no need to add any, nor use self raising flour. Plain flour is definitely the one here. Two rounded dessert-spoons of flour for four individual puddings seems right; pleasingly this amount is pretty much spot on 1oz. (I’m metric through and through, but you can’t ignore convenience like that).

With eggs the age doesn’t seem to make a great deal of difference as it does with meringue, but I found an equal amount of eggs to rounded dessert-spoons of flour gave the right balance of puffiness and chewy bits.

With milk the fattiness seems to have little effect though adding enough to get the consistency of single cream makes the perfect pouring and baking batter. On these lines, I strongly recommend making it in a large jug – pouring stuff into spitting hot fat doesn’t need any more hurdles frankly.

And you must season it – bland Yorkshires are as of air. A dash of soy is nice for an umami quality.

The type of fat was open to debate but served little difference than to change the flavour rather than the finish. I’m choosing to use pork fat from a recent confit to back up the pork flavours. Though it did become clear that the fat should be hot beforehand – the cold fat allowed the dough to just sit there twiddling it’s thumbs while both warmed up.

As for the leave to stand/not stand debate, there is no question that leaving the mixture overnight in the fridge makes for infinitely better results. I’m using cod-Chemistry here but I imagine the refrigeration captures the bubbles in the cold, dense mix and encourages the fluids to meld into the flour to break down any powdery lumps. It can look a bit odd the next day but a supplementary whisk does it the world of good.

Armed with all this knowledge, I constructed my lardy masterpiece. And it was fab. A brown crisp batter, with some firmer texture lower down, savoury sausages and some of the best gravy I’ve ever tasted, luscious with rich meatiness.

So, after all these tests and permutations, what had I settled on? What was the ultimate method?

Of course, it was my mother’s recipe. All these possibilities, and she’d nailed it years ago. 1 egg per rounded dessert-spoon of seasoned flour, slackened with milk.

PS. if you are doing individual Yorkshires, I strongly recommend using muffin tins if you can – they are tall and metal, funnelling the batter up into a pleasing mushroom shape.

Toad in the Hole:

Pinch of salt and white pepper

Milk (about a pint, maybe more or less depending on your flour)

Couple of sprigs of thyme