roast turkey with all the trimmings 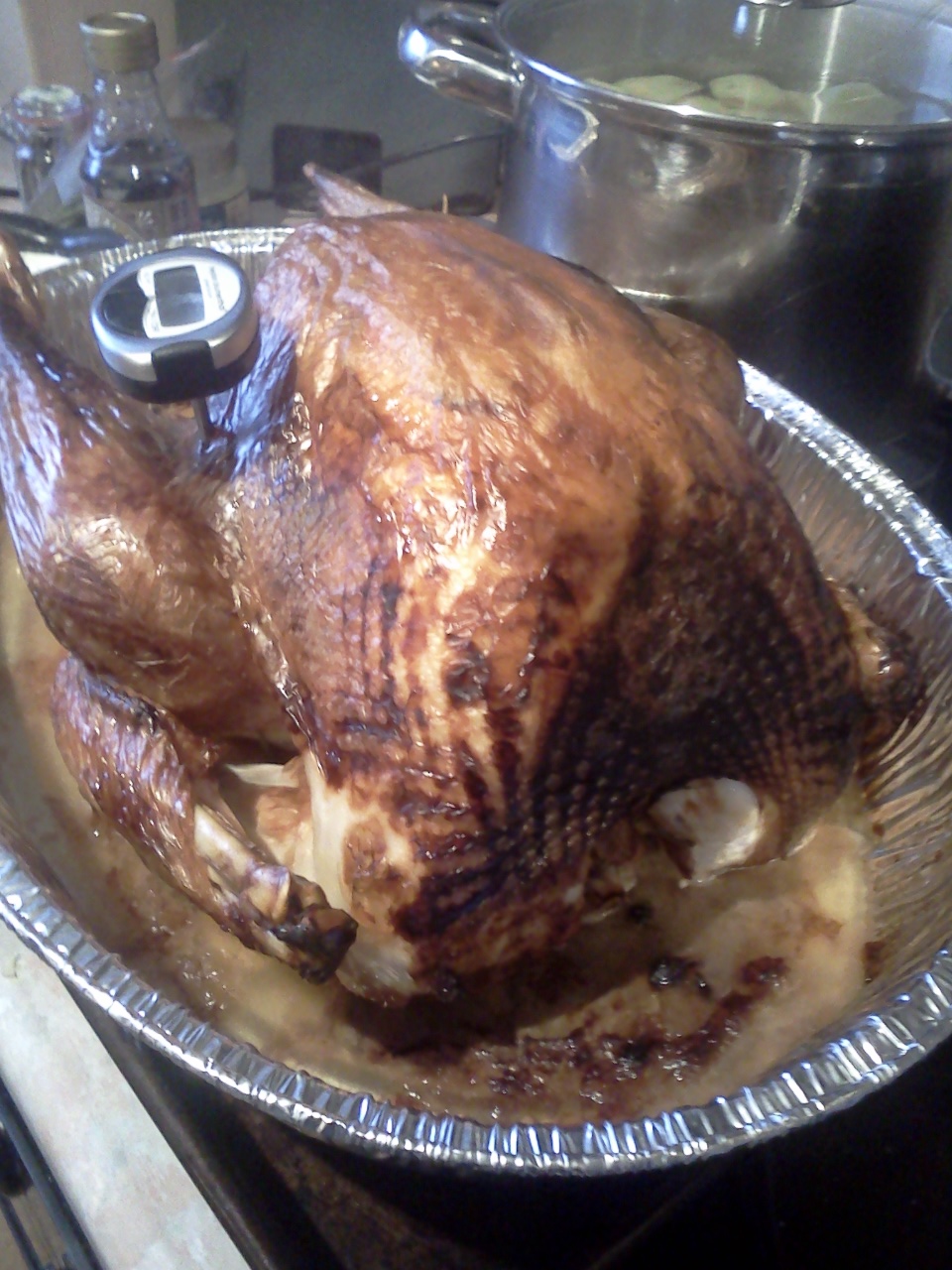 Sometimes, blog posts I write are to spread the news of some great recipe I found. Other times it’s about crazy experiments. But the aim has always been to be a log of what I cooked, and that’s what this Christmas Day feast is about: to remind myself what worked and what to fix for next time.

Perhaps surprisingly I’d never cooked a whole turkey before: on previous years when hosting someone else provided the turkey on another occasion I went for chicken. So on your maiden voyage into turkey cooking, what technique do you follow to ensure no-one is disappointed (least of all me!) ?

I was initially tempted by Matthew Fort’s method for slow-roasting the bird, especially given my previous success with long roasting times. But I just couldn’t take the risk and instead went for the technique of that doyenne of domesticity, Nigella. I grabbed a copy of Nigella Christmas

from the library and swotted up. She favours a brining followed by a hot, quick roasting. I’m a big fan of brining poultry and with trusty meat thermometer in hand I had to follow this one. And I’m so glad I did. It was no bother to prepare as it is done a couple of days beforehand, and by using a foil roasting tray I could chuck it on the recycling pile and not have to scrub the pan after cooking. I had a 5.5kg bird and anticipated a cooking time of 2½ hrs and bang on then it was done. In fact I probably could have removed it 15 minutes earlier as the very outer skin was a little tough and the internal temperature was in the mid 80s, well within the safe range. That aside the flavour was lovely and texture great, so I was very pleased with bowing down to Queen Nigella’s recipe.

So that was the main event. The roast potatoes, well you might recognise that recipe. Sprouts were also cooked to a previous tradition in my house, while carrots were simply steamed – there’s more than enough flavours going on to bother with tweaking these too much. There were also maple-roast parsnips, Jamie Oliver’s “get-ahead” gravy which I’ve made before and is absolutely terrific (a friend of mine commented that it “tastes of everything you put into it”), and on this occasion raised its game with turkey roasting juices and a quick turkey stock.

Other people may raise an eyebrow at packet stuffing, but I grew up on the stuff and a roast poultry dinner just isn’t the same without it. Yes, I know it is little more than a packet of dust mixed with water making it no more sophisticated than a Pot Noodle but I love it.

I can’t remember ever having bread sauce before but read this recipe on Recipe Rifle which, reading between the lines must be a Josceline Dimbleby recipe and therefore failsafe. However after hours of cooking it was watery. The flavour was gorgeous but unfortunately just too wet. I suspect I used rubbish bread which wasn’t in the mood to absorb liquid but I would definitely like to try it again.

Bread sauce apart, all in all a success. Very pleased with the results. Merry Christmas!

(I’ve presented it below as an itinerary as a reminder where I saved time for next year. I aimed for a 2.30pm dinner)

Roast turkey with all my trimmings  (serves 7 with leftovers):

For the turkey & brine:

For the bread sauce:

For the yorkshire puddings:

For the maple parsnips:

For the brussels sprouts: