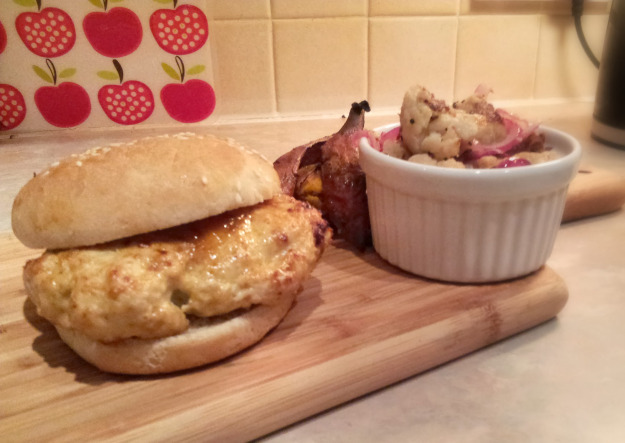 A turkey isn’t just for Christmas. It’s for all year round.

That was the message put out by the British Turkey board. Headed up by Paul Kelly – a good Essex boy – me and a bunch of others were entertained as a guest of Cyrus Todiwala to help promote the use of turkey throughout the year. Cyrus was an affable host, preparing dinner and chatting away. We were blown away by dishes like turkey heart pie and turkey cafreal tikka. All of us were stuffed with the amount of turkey dishes served, it really did showcase the bird!

It inspired me to cook an Indian-flavoured dinner. I have to be honest and say I’d not used turkey outside of December for a few years; it’s appearance in supermarkets seems to have declined. I would quite often but the breast strips for marinating, stir frying or for pies. Using mince here I made a burger with rich masala flavours, inspired by Cyrus Todiwala’s tikka recipe. I marinated mine in clotted cream, because I had some knocking about, but traditionally you’d use yoghurt.

My turkey here was succulent and meaty, and supported by spiced flavours it was a real hit. I will definitely be putting turkey in my basket more regularly.

Based on a recipe by Cyrus Todiwala

For the sweet potatoes:

For the cauliflower pickle: