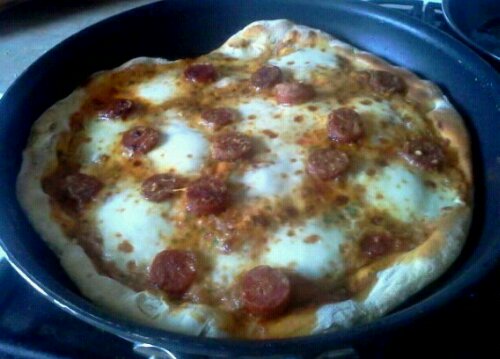 When I first received 30 Minute Meals

for Christmas I tore through it, merrily Post-It noting all the ones that looked interesting, like the beef hash, chicken pie, black forest affogato… one that didn’t get the magic yellow sticker was his 30 minute pizza. How on earth can you get a passable pizza in 30 minutes? I was very doubtful it could work.

When the series came round I watched this episode with great interest. He serves it with three salads, and I was amazed that he kicked off by making one of those! He’s only got 30 minutes, and he’s not even using the full half hour for the pizza! Then as per usual, it was a whirlwind of chuck-it-in-the-blender and spread it into the pan. The method reminded me of Heston Blumenthal’s perfect pizza, where he starts it on a hot pan, then transfers it to the grill to finish. And Jamie’s effort looked pretty good, so I relented and gave it a Post-It note.

Then by happy coincidence Domino’s Pizza contact me and ask if I want to try making something that rivals the Spanish Sizzler. The pizza offers chorizo, roast chicken, green peppers and roquito peppers. I’ve previously taken on their Double Decadence with my own pesto pizza to great effect, so rolled my sleeves up in anticipation of another showdown.

Jamie’s dough turned out surprisingly OK. I made it a touch too thick, so next time I would reduce the flour down and add a touch more salt. But jolly nice all the same! How could I doubt the Jamie technique? The toppings themselves were a well-worn combo: spicy, meaty chorizo; milky mozzarella and the pop of tangy fennel seeds. Great!

About 6 basil leaves including stalks