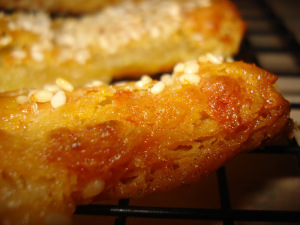 Something of a Christmas tradition for these, me. I used to pore over Mum’s “Cooking for the Freezer” book and most years on Christmas Eve produce a batch of cheese straws. I’m sure the process would take about three hours and there would be that dreadful Dudley Moore Christmas film on in the background.

One year, after preheating the oven I set to sifting, pressing and grating. About 30 mins later I smell burning plastic. Upon opening the oven, I find a turkey stuffed in a plastic bag attempting to defrost and instead getting shrink-wrapped. The bird skin carried a tattoo from that point on, emblazoned with the legend “TESCO”. Tasted fine though.

I did the exact same thing next year.

Not this year though, I fizzed up the recipe for 2008. I rubbed butter (lots) and flour together with a smack of mustard, then piled the cheese in: lots of parmesan and cheddar. Rolled out, cut into fingers and sprinkled with yet more cheese, one bake later they were bubbling and oozing pure cheesomity. They lasted about four minutes.

And not a tattoo in sight.