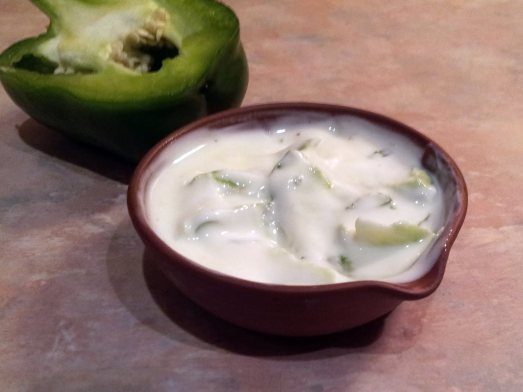 When I started food blogging, I didn’t really appreciate the wide universe of other food bloggers out there. I was writing for myself and completely underestimated how many other people were doing the same thing. Eventually, via Twitter and other foodie feeds, I found lots of like-minded obssessives.

One of these blogs was Stone Soup; a blog devoted to pared-back no-fuss cooking. The freshness and purity of the recipes was appealing, and it certainly doesn’t hurt that the photography is achingly gorgeous.

, she’s going on a “blog tour”. There’s a banner over there > somewhere describing all the places she’s visiting. As part of the blog tour she’s offering cooking advice for troublesome ingredients. I didn’t give her too much of a curve ball but I do look down on the green pepper. When you get one of those pepper multipacks, I use the red one first, then the yellow or orange ones, then invent excuses not to use the green one. So here’s what she said:

GREEN PEPPERS
When Gary asked me to give some suggestions for green peppers, I loved that he described them as ‘the red pepper’s more bitter cousin’. Normally I’m a fan of bitterness but there’s something unripe and green about our friend the green pepper that I’m just not attracted to. So while I use red peppers all the time (there’s even a photo of one on the cover of my book), I hardly ever bother withgreen. Even though they tend to be cheaper.

But if someone were to give me a crate of green peppers from their garden, I wouldn’t throw them out. I’d probably use them raw so at least they provide something in the form of freshness and crunch.

I’d slice them into long fingers to use instead of green beans as a side or salad. Or I’d use a vegetable peeler to shave them into the finest strips possible then toss in lemon juice and a little olive oil for a super crunchy side salad.

They also have enough similarities with cucumber that you can substitute green peppers in most places. I haven’t yet tried it but I imagine grated green pepper mixed with natural yoghurt may make an interesting alternative to raita to serve as a cooling side to curries. Especially for people, like my Irish fiancé who are allergic or intolerant to cucumber.

It’s nice to know I’m not the only one who struggles to love the green pepper. But I was game for the green pepper raita – I wasn’t convinced that cucumber have that many similar properties but there’s something in that.

And it was very pleasant. Fresh and zingy, with a crunch that went well with a chickpea curry. Thanks Jules!