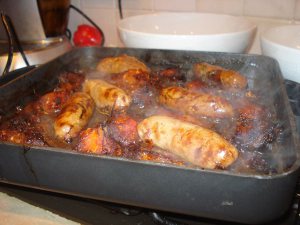 Sorry about the rubbish name for it, but that’s almost all it is! It’s a Jamie Oliver recipe that’s a marvel for taking on the leftovers and gluts from the garden. My tomato plants have been kind to me this year; now I have the remainders to use up and this is just the thing. 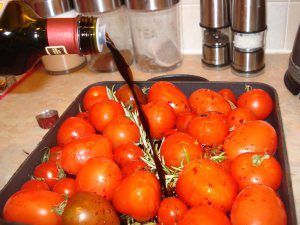 Any tomatoes to hand get chucked in a nice deep roasting tray in a hot oven with a splash of oil, a nice sprig of rosemary (thank you window box), and a healthy swig of cheap balsamic vinegar – about half a bottle. It stays in the oven, filling the house with the slightly accrid whiff of boiling vinegar. It’s worth it though, as the flavour mellows, sweetens and starts to break the tomatoes down. After about half an hour the skins will blister and burst, and you can remove them. It’s a bit fiddly, and I find using some tongs can help to yank them off.
Once the skins are off sausages can go in. Any that you like will do the job. After another 20 mins the sausages should’ve browned, so give ’em a turn. When they’re browned, we’re good to go. Try the broth – you might want to add some seasoning or even a pinch of sugar.
Dish it up, and serve with some bread to mop up all the juice. One day I mean to make this, but then sieve and reheat the sauce to serve with perhaps some lamb leg steaks.